Happy Book B-Day, The Code of Magic by David Hammons with Review 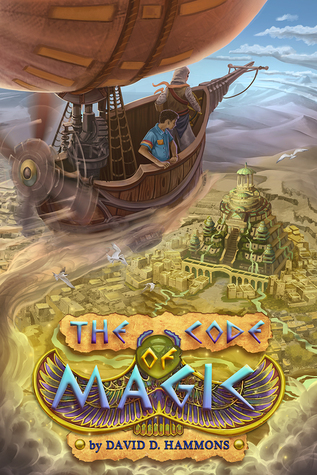 There's a monster in Alex's backyard. He doesn't know how it got there, but with his parents refusing to help, Alex must capture it on his own. When he does, a monster hunting Keeper comes to claim it. Alex follows the Keeper to the world of Edin, a preserve for monsters run by magic-wielders. Aboard the Keeper's airship, and with his giant socket wrench-wielding monster companion, Alex must learn the art of magic if he hopes to stay in this wondrous world. But as he trains with the other children in the fortress of Babili, rumors begin that the Heretic Pharaoh has returned, and Alex's new home is in danger.

There are so many things stuffed into this book--magic, monsters, a little bit of steampunk, different worlds and even a tiny glimpse at Egyptian history (very slight). It seems almost impossible that all of this can somehow slide together seamlessly, but it does...and forms a fantastic read.

Alex is a normal kid from Chicago, who happens to have a pretty miserable family life. But he doesn't let that get him down, and it's exactly this golden attitude which makes him easy to like from the very first page on. He spends most of his time in a tree house, and as the story starts, is dealing with monster attacks (not that anyone would believe him). The scary claw marks, macabre dead animals and huge furry sized shadow give a dangerous touch and catapult Alex's 'simple' life into a huge adventure.

I really enjoyed Alex's spunk. Even when faced with impossible situations and impending danger, he figures he might as well deal with things as best he can and never backs down. Although this does cause him some problems, the attitude brings him far. His bravery often surprised me, and his ingenuity is simply a delight to read about. He's the kind of character boys will root for and wish they could be like themselves.

The world Alex discovers is amazing, full of wonder and magic. The descriptions really bring everything to life, making it easy to picture despite all the new and strange surroundings. The author does a great job looking through Alex's eyes and never runs into the danger of dwelling on details too long. There's just the right amount of information to understand the surroundings, and then the imagination can take flight from there. The book almost feels like a rich and vibrant exploration to a world fantasy friends wish they could someday visit themselves.

Despite all of the magic and fantasy, there's enough thought behind things to make the world feel grounded. Even when Alex learns skills (like sword fighting and magic), the processes are explained with enough detail that the reader has the impression they might be able to learn the steps themselves.

The plot is quick paced and hits one unexpected turn after the other. From the very first moment that Alex runs into the head of the magical world, it's clear that not everything is as it seems, and that there's more at stake than anyone knows or is telling Alex. This adds a nice level of tension, which hangs in the background until the story really starts unfolding.

My favorite part of this story is the subtle humor and fun attitude of  several of the characters. Alex's mentor has quite the personality, and even Alex himself faces dangerous situations, new monsters, life threatening moments and enjoys every moment of it. Neither are the type to sit and think about situations for too long, but want to go in head first. This energy is then mixed with a wonderful tongue-in-cheek and sarcastic humor. The dialogues are up-beat and often left me smiling. Despite this not always serious attitude, there's a nice depth as each faces their own, personal problems.

The other characters each have very distinct personalities, and good or bad, add the perfect spice at just the right times. Alex develops lasting friendships even when these don't seem possible in the beginning, and learns a lot about himself. In other words, there are messages middle graders will have no trouble relating to. . .when they aren't cheering Alex on while he's trying to fight/save monsters.

Summed up, this is a story which fantasy and adventure fans will not want to miss. There's tons of action, lots of amazing monsters and magic, and characters which one hopes to see again.