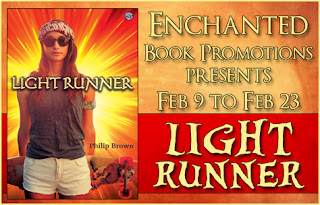 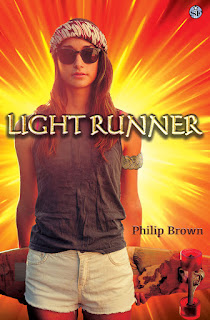 
When a powerful healing armband—the Jyotisha—falls into the hands of a teenage girl, she’s thrust into a dangerous search for her father, the reasons behind her mother’s mysterious death, and the truth about herself.
Sixteen-year-old Dara Adengard would rather read graphic novels than do her homework and prefers the freedom of skateboarding to the restrictions of life with her military father. Stung by the recent death of her mother, Dara conceals her mom’s picture under a square of grip tape on her skateboard. But no matter how much Dara tries to keep a foothold on the past, she can’t ride away from her own destiny.
One evening, she discovers a silver and gold armlet with mysterious powers in the shadowy water of the swimming pool. Forged from an ancient meteorite metal, it possesses the power to heal or wound. When Dara holds it, it emits a light that seems to have been ignited by a star’s ray. Moments later, she is stunned to find that someone’s broken into her apartment, her father has vanished, and a dead body lies sprawled in the courtyard.
Evading the police, Dara escapes on a perilous quest for her father, begins to uncover her mother’s hidden past, and starts to realize the shocking truth about herself. Accompanied by a stray dog, Dara soars to sudden fame on the wings of a YouTube video that shows her using the Jyotisha to heal the handsome Diego of a gunshot wound. When the video goes viral, a famous TV talk show personality connects with her, and Dara is propelled from homeless runaway to worldwide sensation.

Something darted past the corner of her vision, like the flit of an insect, followed by a soft plop next to her in the water. At first, she thought the sound was her own leg kick breaking the surface. She was breathing hard now, and her arms churned the water behind her head. One hand brushed the end of the pool, and she turned to push off with the good leg. Her shoulders ached, and she swam freestyle again, face down in the water.
She turned her head to breathe in—and that’s when she saw it. Next to her, below the surface of the water, something shimmered. Distorted by the water’s light, it seemed to flutter.
Gold and silver metal sparkled, and blended with the light of the pool. Dara stopped, reached out to grasp it—and felt a vibration, like a faint electric shock. She yanked her hand away, and then stared at what appeared to be a wide bracelet.
It drifted closer, suspended in the water.
Get out of the pool, she thought—it could be electrical, some battery-powered toy. Water plus electricity. Not good.
But the bracelet quivered, as though inviting her closer.
Curiosity overpowered caution, and Dara tapped it once with a forefinger. She felt a pleasant tingling sensation radiate through her hand and into her wrist. Emboldened, she grasped the bracelet between thumb and forefinger. The vibration subsided, and she lifted the object out of the water.
Dara stared at a broad bracelet made of braided silver and gold wires wrapped lengthwise around a thick metal band. It seemed hand forged, not from the jewelry counter at Target. Although the bracelet looked clunky, its lightness surprised Dara.
She hoisted herself onto the edge of the pool and sat, legs dangling in the water. In her head, she was already posting an Instagram: “OMG! I found an awesome bracelet in our swimming pool!”
Then she wondered, is this finders keepers? Do I have to hand it over to my dad? Or even worse, the apartment manager—“Gee thanks, kid”—who’d probably sell it on Craigslist.
Dara looked around, but she was alone. The bracelet seemed to have materialized, dropped from the sky into the chlorinated, shadowy water.
Dara slipped it onto her wrist and tried to squeeze the band, clamping it tighter, but it was too loose and slid onto her lap.
She thought she heard someone walking nearby, outside the pool, followed by the sound of heavy running footsteps. She clutched the bracelet and glided back into the pool, holding her head under water. She pressed against the side of the pool and wished the light wasn’t on. When she thrust her mouth and nose above the surface, the only sounds were her own gasps for air.
She pulled herself up and sat on the edge of the pool again. Her heart raced as she glanced around, then listened to her own breath and the gentle lapping of water against the pool’s lip.
She set the bracelet on her lap. It slipped down one leg until it hit the edge of the soggy gauze on her wounded knee. The bracelet teetered, and she raised her leg to keep it from falling off. A sudden stab of pain in her knee made her flinch.
The bracelet reflected a light that seemed to shoot from above, and the metal strands sparkled.
Dara glanced up at the shimmering star she’d seen earlier, then back at her knee.
The bracelet was trembling.
It began to glow with an iridescent light, and her knee felt warm.
A breeze ruffled the leaves of the plants around the pool, but the air around her body was still, and the odor of pungent smoke had been replaced by the fragrance of jasmine. Afraid the bracelet would plunge back into the water, she grabbed it. Philip Brown is the author of the YA contemporary fantasy novel, Light Runner. He previously wrote two astrology books, Cosmic Trends (published by Llewellyn Worldwide Publications and a finalist for the Coalition of Visionary Resources Award) and On the Cusp: Astrological Reflections from the Threshold. He also wrote for Dell Horoscope and The Mountain Astrologer. Light Runner, published by Strange Fictions Press (an imprint of Vagabondage Press), is his first novel.
Philip studied to become a Shakespearean actor in London, but a love of books and writing led him to become a high school English teacher.
He received his Master of Arts degree in English from California State University Los Angeles and lives in Southern California. He is a member of the International Society of Children's Book Writers and Illustrators.
Links
Website:  www.philipbrownauthor.com
Facebook: https://www.facebook.com/philip.brown.author
Twitter: https://twitter.com/philipbrown1
Instagram: https://www.instagram.com/philipbrownauthor/
Pinterest: https://www.pinterest.com/PhilBrownAuthor/philip-brown-author/