Review: Tales from the Land of Forever by B.A. Keating 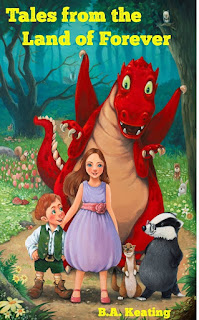 Our magical adventure begins when Sarah George, an ordinary ten year old girl from an  ordinary borough of London, is forced to move to the Cornish countryside, after the sudden and unexpected death of her father, to live with her dreadful snob of an aunt and horrid cousin.
Struggling to cope with this sudden upheaval, Sarah ventures out one night to the manor library, despite her Aunt Maude’s express instructions to never set foot in there again, and happens upon an ancient and intriguing children’s book. However, all is not what it seems, and upon opening this dusty, old tome, Sarah finds herself somehow magically transported to the far off and enchanted Land of Forever.Upon her unexpected arrival in this fantastical realm, Sarah is fortunate enough to befriend a wise old badger named Monty, and his increasingly moody sidekick, Fidget – a bad-tempered red weasel - and together they set off on an epic quest across this magical land to help Sarah find her way back to the Ordinary World and her family once more.Our band of intrepid travelers, who are soon joined by a cheeky young leprechaun named Jack Flannigan, and Tiberius, a two ton fire dragon, encounter many pitfalls along the way in their desperate search for answers and the elusive Bookkeeper. They must battle the dark forces of the Silent Forest, escape the clutches of an evil banshee, and survive a brush with the deadly and sinister Watchers, before eventually reaching the Middle Lands and the spectacular golden palace of the Fairy Godfather, where the most powerful sorcerer in the land holds Sarah’s fate entirely in his hands.

When I saw the cover, I was sure this was going to be an enjoyable read. And it was. Sarah is a sweet girl who is struggling to cope with the most horrid circumstances: loss of her father, leaving her home and landing in a place where love seems to be a distant memory. It's so easy to sympathize with Sarah, and when she finally happens across the other world, it was like a fresh breeze she desperately needed. I couldn't wait to explore the strange world with her.

One of the things which drew me in the most was the traditional fairy tale feeling to Sarah's adventures. The creatures are mystical and the land is magical--a wonderful setting for a child's imagination to take flight. Despite the dangers and troubles she runs across, there's always a sense of hope which keeps the plot from going too dark. This was something which I really appreciated and found very fitting for the intended audience. The basic messages of trust, friendship and perseverance flow throughout the story like a faint glow of sunshine even when Sarah and her friends faced tough and dangerous situations.

The world Sarah encounters is vibrant and curious, offering new surprises around every corner while keeping enough familiarity that young readers will have no trouble picturing the scenes around them. There was never a dull moment, but with all the fun and caring friends Sarah runs into, there's not much room for boredom. Of course, there's more than enough 'evil' creatures out there determined to keep the heroes on their toes. But each character, good or bad, had a distinct personality and spiced up the adventures in their own way.

The writing is very fitting for kids ages eight and up, although I'm not sure much older kids will enjoy it quite as much. Especially girls will enjoy following Sarah on her journey. The length of around 270 pages did make me wonder if this might be a bit heavy for more reluctant readers, but the chapters are carefully broken down in such a way that a reader can go through one bit at a time without feeling overwhelmed. I see this as a great bedtime read and can imagine that it would bring several nights of sweet dreams. 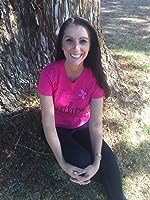 B.A. (Beverley Anne) Keating has been an avid reader since the age of four.  Her love of fairytales, heart-pounding adventures, and magical flights of fancy led her to put pen to paper to create her own fantastical, page-turning tales for readers of all ages to enjoy and treasure.

Beverley was born in London, England but has lived and traveled all around the globe – always with a book firmly clasped in hand -  residing in both Portugal and New Zealand, before making her home in sunny California with her husband and five rescue kitties.  She trained as a classical ballet dancer for 15 years and attended a prestigious dance academy in London.  As well as a diploma in dance, Beverley also has a degree in English.