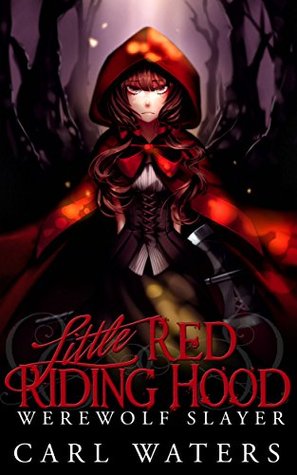 
The legend is true. Beware the red cloak…

Sixteen-year-old Giselle has never strayed far from the watchful eye of her mother. While she's always looked up to the nurturing, yet powerful Adela, she wonders about the true significance of her mother's title: the Red Hood.
Giselle dreams of donning the red cloak herself some day. When the forces of evil gather to seek her mother's blood, the untrained Giselle is left on the sideline.
After a whirlwind of werewolves and tragedy strike the family, Giselle must quickly learn the true powers of the red cloak. Failure to do so will doom her to a fate much worse than death.
Little Red Riding Hood: Werewolf Slayer is the first book in a series of paranormal urban fantasy adventures. If you like fast-paced plots, bloodthirsty creatures, and reimaginings of classic tales, then you'll love Carl Waters' kinetic and powerful series starter.
Buy Little Red Riding Hood to get hooked on a new fantasy roller coaster today!


Being a fan of fairy re-tellings (especially darker ones), I was looking forward to reading this.
The story centers around Red Hood--which is obvious. In this story, Red Hood works for the king and keeps the forest clear of horrible creatures. It's an honor, passed down from one generation to the next. But this story isn't about the reigning Red Hood, rather her daughter who is a Red Hood in training.
The story is short. Very short. And I think that's its biggest downfall. The little Red Hood is a sweet girl and comes across as a character I was ready to fall in love with. She's got spunk but not overly so and adores her mother, although the mother is a pretty hard nut to crack. From the first page, I knew that this was a little girl I could cheer for. She has tons of spirit, wields the heart of a hero and still is fragile enough to make one hope she can make it through. At times, she comes across a little younger that sixteen.
I was caught up in the story immediately and loved the way the author weaved the fairy tale character into a force to be reckoned with. Even the plot lures in as an unexpected twist arrives, promising a fantastic adventure. But then, the pending disaster happens too quickly and the gusto falls short of what it could have been. Still, little Red Hood kept me going, and I was eager to see how the adventure continued.
The ending--again--came too quick and a little too predictable. There are several questions left unanswered (which I'm assuming will be answered in the sequels) but none of this bothered me to the point I would have laid down the book. I was more disappointed that the story ended where it did. I was ready to follow little Red Hood anywhere and into every battle, but that was it. Her story ended before it really began. . .as if it was chopped off. That's why I'm a little torn between 3 and 4 stars.
Summed up, this was an enjoyable read--otherwise, I wouldn't have wanted it to continue. Considering it's the first in a series, I can only hope that her adventures will blossom from here because she'd be a fun character to follow.
on January 16, 2016