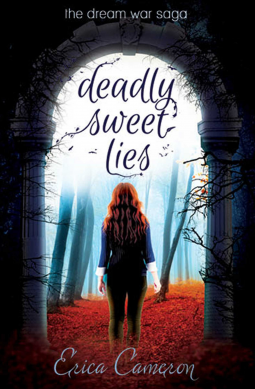 
Nadette Lawson knows when you're lying.

Every night for the past two years, the Balasura have visited her dreams, enticing her to enter their world. And every night she's seen through their lies. Now, they're tired of playing in the shadows and they begin to stalk her in the waking world. It's no longer just an invitation; if Nadette doesn't join them, they'll take her family. Forever. She needs help, and the haven she's seeking may be just out of reach.

Julian Teagan is a master of deception.

To survive, he has to convince the world his mother isn't useless, that everything's fine, otherwise he'll lose what little he has left in this life. He knows the lying won't be enough to keep him and his mother in the shadows, but it's all he knows. The only light of truth is Orane, a Balasura who sees past Julian's facade and challenges him to face the darkness. Then Orane is killed, and Julian learns his mentor was far from innocent. The Balasura have hunted children like him for centuries, and their next target, Nadette is his one chance at finally being a part of something real. If Julian can just convince her to trust him.


I received this book from Netgalley and made the mistake of reading it without diving into book one first. Although it wasn't too hard to get into the plot and understand what was going on, it took a bit for me to connect to the characters--something I'm sure would have been no problem if I would have started this series from the beginning.

The first pages were a little confusing. The first, short scene was grabbing, but then it dives into a dream world, and I was lost for a moment. But this was my own fault as mentioned above.

The characters, Nadette and Julian, are up against demons which haunt dreams. Nadette is their target, but unlike many victims before her, she's not easily fooled and doesn't give in. Her uncanny ability to tell when someone is lying fits wonderfully with her personality and makes for several great moments. It was easy to like her and understand the choices she made.

Julian is determined to help Nadette, but he's not the perfect hero. In unison with Nadette's power, Julian can make people believe lies. Of course, this doesn't work so well on Nadette. This creates an interesting background and calls for obvious problems as he tries to convince her that he wants to help.

The world and set up are interesting, and after the first pages, I had little trouble falling into the story. The only problem really was the pace. It's a bit slow and dragged at times. . .which is dangerous for a reader like me who is easily distracted. But it dives into thoughts and emotions, and is perfect for those who like a calmer pace.