Excerpt: You Think This is a Game? by Bernard Maestas 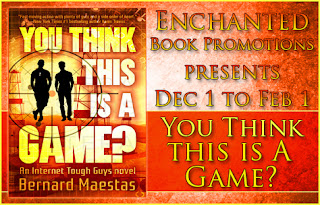 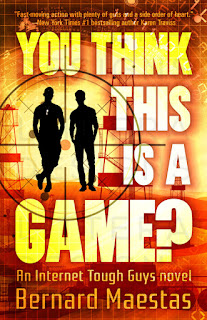 YOU THINK THIS IS A GAME?
Internet Tough Guys, Book 3
by Bernard Maestas
Rebel ePublishers
YA Thriller
179 pages

Wisecracking smartasses Ted and Alex are an elite army of two, fighting for fortune under the banner of their private military corporation Reagan Kirwan International. MIT-trained computer hacker and engineer Ted is the brains. Freerunning ex-French Foreign Legion commando is the brawn. With their unique combination of skills, they are in high demand on the blurry and ever-changing modern battlefields.When oil is struck in a Somalian province, two titans of the energy industry collide head-on over the lucrative rights. The result is a war which rages both in the boardrooms and on the already bloody sands.Hired for the simple task of tipping the scales, Ted and Alex’s mission takes a dangerous and deadly turn. They learn they are not the only trump cards in play and, this time, they may be on the wrong side. Facing the most dangerous of adversaries, constant perils, and treacherous corporate politics, they must stand together if they want to survive – and, more importantly, collect their paychecks.Because war is a two-player co-op and all they have is each other.


“Hard at work, I see,” Ted said. He had no doubt Alex had known he was coming from the second he’d stepped out of the cafeteria. There was no flinch of surprise, no snap of the ex-commando’s head over his shoulder. That would have been near critical cause for worry.
In reply, Alex patted the butt of his rifle, slung and dangling in front of him. “I’m locked and loaded. My part of the mission is done until we move out.”
Ted stepped up alongside Alex, following his presumed gaze out to the horizon where he watched the sun sink lower towards the horizon. Neither of them said anything further for a few long moments. Alex smoked, the ember at the end burning down to the filter before he flicked it off into the distance and reached for another.
Ted finally broke the silence. “So are you going to tell me what’s going on with you?”
“I don’t know what you’re talking about.”
Ted sighed and shook his head. “You’re brooding like an emo Batman – Christopher Nolan Batman, not Tim Burton Batman – and it doesn’t suit you. You haven’t even made a Jewish joke in days. So, yeah, something’s up and you know exactly what I’m talking about.”
Alex’s soft features bathed in the flicker of his lighter as he brushed the flame over the tip of his next cigarette. It closed with a snap and vanished into his pocket with a sleight-of-hand flash. He plucked the cigarette from his mouth and exhaled smoke in short puffs with every syllable that followed. “It’s this op,” he lied. “Don’t you have a bad feeling about this one?”
“No, I don’t,” Ted replied. “I think it’s going to be an easy hundred grand and that we’ll be back in the States in time to see the Captain Justice movie on opening night. That’s not what’s on your mind, and you damn well know it.”


SEVEN
Ted frowned. "Don't you feel anything? Killing all those people?"
"What? You mean recoil?"
A flush of frustration, just shy of anger, boiled through Ted. "Forget it." He spun away, not sure where he intended to go.
With Alex’s question hanging, unanswered, over their heads, the pair sat while Alex tended to their wounds, Ted’s first. His unclipped medical pouch rested on the street between them, opened, as Alex leaned in to examine the slash on Ted’s arm. “That will need stitches,” he noted. “But we don’t have time for that at the moment.” Instead, he produced a small metallic silver tube.
“What’s that?” Ted asked.
“Superglue.”
Ted recoiled. “You’re not Supergluing my skin!”
“Don’t be a baby,” Alex muttered, snatching his partner’s wounded arm and squeezing a gooey line along the oozing wound before pinching it shut. Ted hissed through his teeth but found the sting faded fast; seconds later Alex slapped an adhesive bandage over it.
“Huh,” Ted mused as he noted that the bandage held its tan color, no red stain soaking through. “That’s actually pretty effective. What else do you have in there?” Ted leaned over, peering into the strapped-down medical supplies in the open satchel. “Are those tampons? Why the fuck do you have tampons in your medkit? You don’t start your cycle for another week and a half.”
“Why do you know when I start my cycle?” Alex fired back with a jovial smile.

Bernard Maestas lives in paradise. A police officer patrolling the mean streets of Hawaii, he has a background in contract security and both military and civilian law enforcement. When not saving the world, one speeding ticket at a time, he can usually be found wasting time on the internet, playing video games -- or both. Occasionally, he finds time to write books.

Email ThisBlogThis!Share to TwitterShare to FacebookShare to Pinterest
Labels: Bernard Maestas, Internet Tough Guys, YA Thriller, You Think This is a Game?