Review: Surf's Up by Kwame Alexander 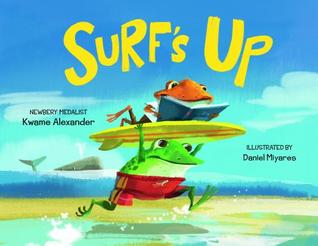 Surf's up! Not yet, Dude! Books are boring! Not this one! Bro and Dude have very different ideas about how to spend the day at the beach. But as Bro continues to gasp and cheer as he reads his book (Moby Dick), Dude can't help but get curious. Before you can shout 'Surf's up!' both frogs are sharing the same adventure, that is, until they get to the beach. Newbery Medal Winner, Kwame Alexander, and Daniel Miyares have joined forces to give little listeners a wild ride.


I saw the cover on this and just had to get my hands on it (so I got a free copy in exchange for an honest review). This is a picture book for even the youngest of readers and it's oh, so cute!

The title says it all; two amphibians want to go surfing, dude! The problem is that one would rather do something totally uncool - read! *gasp* Now, there aren't many words to this. The pictures carry most of the story as it reflects what the frog is reading through flashes, while the writing is mostly short phrases exchanged between the frog and his friend. At times, I found it a little confusing, and I did have to explain to my daughter what was going on even though she's not the youngest of readers at eight.

Still, my daughter found the exchanges hilarious. She laughed and giggled the entire way through, and at the end, told me how funny this book is. So, taking her reaction into account, I'm giving this four stars. The illustrations are bright and fun. The exchanges completely drew my daughter in and caught her attention. The story around the words wasn't as clear though.

But I recommend it, especially when it makes my child laugh that hard.