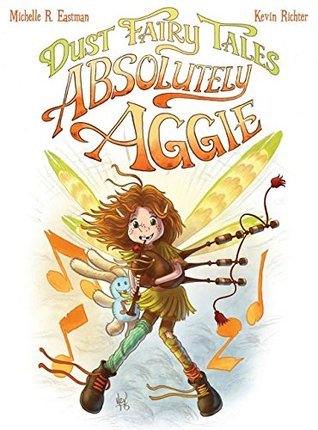 Fairies, music, and dust! Oh, my! Aggie is a little Dust Fairy with a big problem. She wants to join the fairy band, but they do not approve of her offbeat style. Aggie is determined to impress them, but that turns out to be harder than she imagined. Just when she thinks she will never find a way to fit in, Aggie discovers it might be more fun to stand out. Lively, rhyming stanzas and vibrant illustrations come together in this magical tale. It is sure to delight boys and girls alike while imparting a positive message about embracing one's individuality.


What a sweet book! There are fairies which spread dust, play games, or are simply as pretty as can be. And after reading this book, kids will be on the hunt to find them in their own houses. Well, except for a little fairy named Aggie who has a hobby which doesn't quite fit in; she plays bagpipes.

The most capturing thing about this book is the illustrations. They are simply a delight to gaze through and be swept away into a fairy world . Even the littlest will have no problem falling into the story, and I'm sure they'll soon choose a favorite fairy of their own.

The story starts with a description of the fairies--fun fairies and somewhat naughty fairies. And just as Aggie enters the pages, the whole scene takes a jolt. Her character isn't as sweet and my daughter even curled up her nose a little when Aggie stepped onto the pages. The problems Aggie has and her reactions make her easy to sympathize with. The 'bullying' is nicely laid out, making the pain it cause Aggie clear without getting too mean. The solution (ending) is well-rounded and perfect for the intended age group. Although, to my surprise, Aggie did not turn into my daughter's favorite character, but rather, she still found her odd. Oh well. Not everyone's the same.

The writing itself is fun and creates a vivid fairy world. It could have been a bit smoother, and I wondered why it had to be in rhyme. But the story is conveyed in a way kids can understand and speeds along just right to keep a reader interested in the pages without over-whelming them.

In other words, I recommend this and hope there are many books like it to come.