Review: The Age of Amy by Bruce Edwards 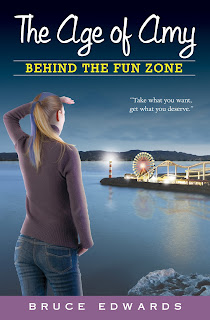 Are you a Jimmiehead, or are you still using one of those old-fashioned smartphones?


Jimmies are tiny microchips, that when painlessly implanted into your brain, magically transform your eyes and ears into the ultimate hands-free device. No more fumbling with fragile phones, loose earbuds, or clumsy controllers. Watch movies without looking at a screen. Take photos through your eyes. Text with your brain waves.


Everyone wants a Jimmie—except 16-year-old Amy, who detests technology in any form. But when thousands of teenage Jimmieheads mysteriously vanish, only she can save them. Immune to Jimmie's influence, Amy embarks on a quest to find the missing teens, ultimately revealing an ominous connection to a spooky, old amusement park that's been dark for 50 years!

I haven't read the other books in this series, but that wasn't a problem. This book is a stand-alone in every way.
After reading the blurb, I wasn't quite sure what to expect, and I'm glad to say that the story is more intriguing than I thought it might be. In many ways, it takes our modern day world and intensifies it. Instead of running around with cell phones, the internet and all it's possibilities is streamlined into a tiny chip, which is placed in the head. Communications, GPS, videos, and everything else one can think of is directly linked with the brain. Even computerized cars read where a person wants to go and drives them there automatically.
Amy, a sixteen-year-old girl, is one of the few people who doesn't trust any of this.
Her character is a girl with a good sense of self-esteem and a nice amount of stubbornness. She's smart, sticks to what she wants, and true to her friends. It was easy to root for her, and her reactions didn't only make sense but were often well thought out--perhaps too well thought out in the beginning. Usually, she's a great teen, who's easy to sympathize with. But other times, she acts too old for her age and comes across a bit preachy. Her reactions to the technological advancements were okay but sometimes went a bit too far. Her statements were wise, and one or two of them would have supported her cleverness. But she constantly thinks farther which didn't make her feel like a teen but rather that she was an opportunity to bring over an opinion and message. Although these moments in the first chapters made it hard to connect with her as a character, as the story progressed, it was easy to fall back in stride and root for her.
The plot is fast paced--I read this in one sitting and didn't have the urge to put it down. The author does a great job of setting up the world, making it familiar enough to dive in. The technology described is easy to understand as well as the results it has on the world around it. It was a very unique and interesting surmise too. It doesn't take much of a step to see the technology and world the author describes, which makes the result really hit home.
In general, the story flows very well. There were a couple of moments where the scene jumped as if something was missing, and I didn't really understand several of the 'bad guy's' actions in the end, but I still was intrigued and caught up in the story until the last page. I never knew what was going to happen next and found myself hoping that Amy and Zac would make it through. (They were stuck in some pretty tough situations).
This is an interesting book that modern day kids will have no trouble relating to. There's twists and turns to keep the reader guessing, moments where it's not certain the heroes are going to make it through alive and other times, where it's easy to cheer them on. In other words, it's definitely worth a read. 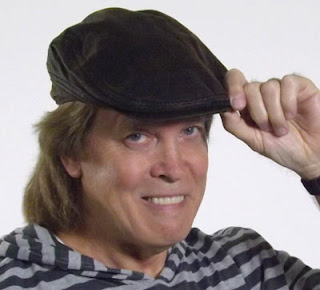 Award-winning author Bruce Edwards is a former Hollywood film animator, and brings the whimsy of a character artist to his stories. A music major in college, he is also an accomplished musician and composer. His other creative endeavors include a stint as a puppeteer and performing magic at Disneyland. Bruce's thought-provoking books for young adults are never short on fun, fantasy, and imagination.

AUTHOR LINKS
Behind the Fun ZoneAgeOfAmy.comFacebookTwitter

Email ThisBlogThis!Share to TwitterShare to FacebookShare to Pinterest
Labels: Behind the fun Zone, Bruce Edwards, The Age of Amy, YA Science Fiction