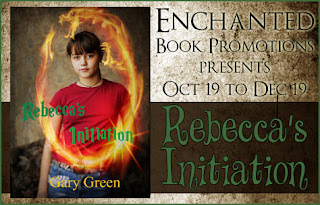 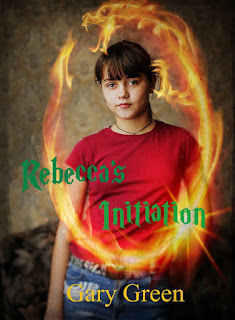 Rebecca’s Initiation is a fast paced fantasy adventure about a young girl who loses her mother in a car accident and has to go live with her grandmother. Her grandmother, Naomi, is an extraordinary woman who lets Rebecca in on her secret and initiates her into a world of magic populated with fairies, gnomes, elves and a dragon. Rebecca soon learns that her mother’s death was not an accident and that she was the intended victim. An ancient god has marked her for death and without the help of her new magical friends she is doomed. She has to learn how to defend herself—and learn fast. Rebecca’s Initiation will keep you guessing from beginning to end.

Meanwhile, Rebecca had followed the path down to the pond. What she found there was a small sandy beach, with a dock and a small wooden rowboat upside down on the beach. Sitting on the boat was a small creature unlike anything she had ever seen. He looked a little like a teddy bear, except he had hands and a human-like face. In fact, his face looked a little sinister. His grin was not contagious like Pip’s. It was kind of creepy.
However, in light of all the new and amazing things Rebecca had seen and heard in the last couple of days; she decided to not judge this book by its cover. She walked up to him and extended her hand.
“Hello, I’m Rebecca.” She said.
“I know.” He said, shaking her hand. “You may call me Marid. I am very pleased to make your acquaintance, Becky . . . Becca . . . the Beckster.”
“I prefer Rebecca.” She said.
He seemed friendly, but there was something about that grin. It was downright creepy. Rebecca was trying to think of something to say when she heard Pip from behind her.
“Rebecca, back away from that thing.” He shouted. “And you! Marid!” He spat the name out as if it tasted bad. “What are you doing here? You know you are not welcome here.”
“The Boss won’t be happy about this.” Marid snarled.
“I really couldn’t care less what your boss thinks. Just go.”
“Ok, I’ll go. But before I do, I have one thing to say to Becky.” He said, turning to look her straight in the eye. “Your mother’s death was not an accident.”
Having delivered his message, he just disappeared, but his laughter could be heard fading away into the distance.
Rebecca just stood staring at the spot where Marid had been standing. Then she turned to Pip and said, “Who was that?”
“Marid, he’s more of a ‘what’ really.” Pip said, gazing in the direction where Marid disappeared.
“Ok, so what was that?” Rebecca’s voice had an edge to it, as she was starting to lose her patience with Pip.
“That was a gremlin,” he began. “I suppose I better explain it to you since you are getting cross with me. Gremlins are trouble. They delight in chaos. They break things just for the fun of it. They lie and cheat and generally make a mess where ever they go. Naomi, or rather Cedric has banned them from this wood.”
“So, who is this ‘boss’ he mentioned?”
“That would be the so-called ‘Great God Pan’. He used to be one of us, but he grew to hate humans. There was some unpleasantness—I don’t want to go into details—and Pan, and his followers the gremlins, trolls and a few others, broke with us and have been causing trouble since. You should not think about them because it attracts them.”

It has been a long journey from depressed, lonely and alcoholic farm-boy to internationally known, award winning author. Using insight he gained from his own struggle he helped hundreds of individuals move from misery to joy during the many years he worked in the human services field. During his journey he also taught many other care-givers how to improve their ability to help others.
During this time he became a practiced listener and a good story teller.
Now he divides his time between his small farm and writing inspiring and educational books.
His writings have helped many learn the skills needed to:
He has long lived by the motto “Inspire Joyful Sanity”. So, what the heck does that mean? Well, the inspire part is obvious. His definition of sanity is to understand and accept the universe and the rules that make it work. The joyful part refers to the idea that joy is the default state of the human mind. The idea is that as you understand and accept the rules of the universe you remove the barriers to being in a joyful state. His goal is to inspire joyful sanity in himself and others.
His first books were inspirational self-help. However, all his life he has been a fan of sci-fi and fantasy. Rebecca’s Initiation is his first attempt at writing fiction and the first of a planned series called Redemption.