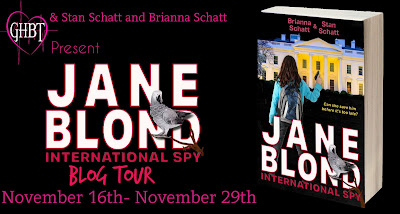 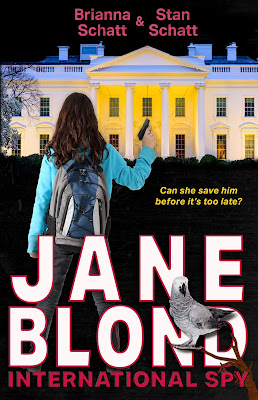 Fourteen year old Jane thought getting through high school was difficult enough with her dad in prison and her mother dating. Throw in being bullied by the popular girl who has everything- it’s completely unbearable. But when terrorists kidnap a boy she cares about, she knows she is the only one who can save him. International Spy, Jane Blond, must prevent terrorists from blowing up her school during the President’s visit. She’ll need all of her courage along with the help of a teen with CIA secrets, a friend with Asperger’s and a parrot with an attitude.

I turned and waved, and then headed toward my daily battle with the uncrowned Queen of Broxton. Jeff’s very lucky. He doesn’t have to worry about gym because of his condition. As much as I hated gym, I know my best friend Anouk despised it even more because everyone always chose her last. No matter what sport we were playing, Ms. Houseman always appointed Tula and me as captains because she says we have “leadership qualities,” whatever that means. I can’t imagine why anyone would want to follow Tula. You’d think everyone would hate her, but with her stood Hannah, Stacy, and Melanie. They clustered around her like pawns protecting a queen. Tula towered over most of us. She was blond with blue eyes, like many of the people from Uzbekistan, and she speaks English with just a slight accent. Mom told me that the country has lots of oil, and some people are incredibly rich. It probably explains why Tula never bothers to buy clothes on sale and always makes fun of whatever Anouk wears. Amat Mafte, Tula’s cousin, always shows off his wealth as well. Very few seniors drive a red Maserati Quattroporte.
What separates the Uzbeks from the other snobs at Broxton is that both of them hate everything about America. Amat calls us “decadent” while he drives around in his $100,000 car and most of our parents drive minivans. I heard Amat use the word “monkey” to describe all blacks, and he calls Hispanics “animals.” Tula thinks anyone without money is stupid.
I don’t know who told her about Dad, but she’s always saying that the lunch monitor should check the cash register to see if I took any of the change. I hate her. Still, not everyone does. Tula received one more vote than I did last year for class president. It probably didn’t hurt that she gave away tickets to a concert just before the election. I protested all the way up to Mrs. Marshall, but since Tula wasn’t giving away money there wasn’t anything in Broxton’s election bylaws to stop her. I guess Tula could hand out cash to voters, and it would be considered normal election tactics in Uzbekistan.
Gym is very much like prison. Nobody would wear those horrible uniforms if they had a choice. Ms. Houseman would make the perfect warden because she’s always ordering us around.
She blew her whistle and herded us to the basketball court where we first had to choose teams. Tula and I took turns choosing players until there were only two girls left. Maxine could outrun and outshoot Anouk, and my friend stared down at her feet while she probably waited for the inevitable last pick. I knew her well enough to feel her embarrassment. For all her wonderful qualities, nobody would ever mistake Anouk for an athlete—thin with long legs that are so white she really does look like a skeleton, not very well coordinated, and looks like one of those fake Halloween skeletons when she runs. Even so, I didn’t hesitate.
“I’ll take Anouk,” I said. She smiled in gratitude while Tula then selected Maxine and whispered something to her. The girl laughed, but I figured she was just trying to hide her embarrassment for being chosen last.
Gym comes near the end of the day, so I noticed that several people were sitting in the stands. I saw Amat whispering in the ear of some girl I had never seen before. She obviously didn’t go to Broxton because her skirt was way shorter than the school dress code allowed.
Our teams were pretty evenly matched despite us having Anouk. We went back and forth, always within a couple of points of each other. I missed a shot, and Anouk went up for a rebound. What she lacked in talent, Anouk makes up for with heart; nobody ever tries harder. Tula moved closer to Anouk like a shark sizing up its next meal. Tula Markonokov is built like one of those Italian movie stars on the cover of People magazine, the ones whose boobs are always falling out of their tops. My friend Bruce called her “voluptuous” the first time he saw her. Tula jumped, and I clearly saw her swivel one of her ginormous hips so it caught Anouk while she hung helplessly in the air. Anouk went crashing to the ground and landed hard on her back. 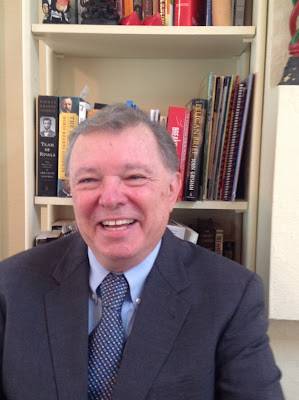 About the Authors-
Dr. Stan Schatt spent many years as a futurist responsible for forecasting future technology products and markets for Fortune 500 companies. He served as a Fulbright Professor and taught at Tokyo University, USC, and the University of Houston. He is the author of over thirty books ranging from science fiction and paranormal mysteries to young adult novels. Schatt is a technology expert who has been quoted in the New York Times, Fortune, and BusinessWeek as well as CNBC.