Review: The Tears of Adina by J.T. Cope IV 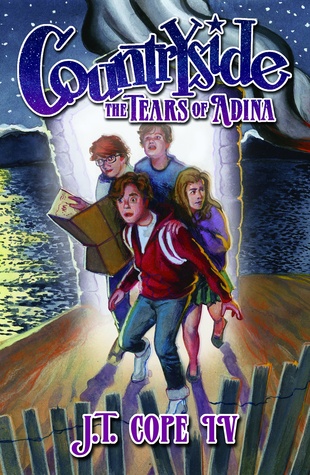 Luke Rayburn has spent summer vacation running up and down sandy beaches with his family. He’s explored hidden coves, learned how to write invisible letters, and even met an ocean nymph. But his friends write to tell him of strange happenings in Countryside and he’s anxious to get back.When Luke returns, he finds that much has changed. Mischievous gnomes are spreading chaos across the valley, a lone wolf haunts the forests, and Mayeem, one of Luke’s new teachers, just happens to be a mermaid. And then there’s the hunter, a man with golden eyes, only part of a soul and the belief that Luke has hidden something he wants—something he’s willing to destroy Countryside in order to get.Hounded by blackhearted men and soulless creatures and with darkness luring him in, Luke must gather his wits and ferret out his true friends. But as he draws close to finding what it is the hunter seeks, he will learn that there is more at stake than he understands. He’ll learn that it’s not the hunter he should be afraid of and that, once done, some things cannot be undone.


After reading the first book in the series, I was looking forward to see what happens to Luke and his friends next. And I wasn't disappointed.

Luke is as curious and adventurous as ever, and although he's told time and again to stay clear of the dangers 'attacking' the area, Luke can't stay out of it. Some of this is due to circumstances beyond his control. Other times, it's not. But it's exactly this inability to always obey, which makes him a true kid. Luke is in general a good kid too. . .despite the darkness that he's trying to control. . .and truly respects those around him. Sometimes he looses his temper, but again, it's these characteristics which make it easy for readers to relate to him.

From the first gnome attack in the beginning pages, Luke and his friends find themselves wrapped up in an unexpected adventure. Dangerous creatures, creepy individuals, puzzling messages and all sorts of magic make a delightful mystery full of tension and surprises, which kept me guessing until the very end. Kids will love diving into the fantasy filled world, while following Luke and his friends as they try to figure out what is really going on.

My favorite part of this series is the simpleness of the world. Despite the mythical creatures and use of magic, much of the described world is familiar--sports, teachers, and lemonade. The scenes are beautifully described making it easy to dive into the world. And the importance of family and friends, and the love they have for each other is always clear no matter how bad things get.

This is a fun series, full of adventure, action and fantasy, which kids ages nine and up are sure to enjoy.