Review: Emma and the Banderwigh by Matthew Cox 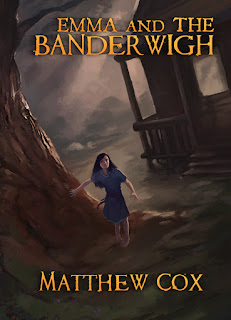 Ten-year-old Emma doesn’t believe in faerie tales or monsters that secret children away in the night—until she meets one.

She lives in a quiet village at the edge of Widowswood with her parents, her Nan, and her little brother, Tam. Ready to abandon the whimsy of childhood, she finds the boredom of chores comforting and Nan’s fanciful bedtime stories silly.

One morning, a wan and weary older girl staggers out of the woods and sets the entire town aflutter with whispers of a child-stealing monster lurking in the forest. Nan tells her of the Banderwigh: a dark soul who feeds on sorrow and drains the life from children’s tears.

Darkness comes calling on Emma’s happy home, threatening the reality to which she desperately clings. The impossible becomes more and more real, forcing Emma to reach inside herself for the ability to believe. Her family depends on it.

This book has the feeling of a traditional fairy tale, reminding me a little of Hansel and Gretel but with so much more love and mystery.

The story takes place at an earlier time--dark forests, no running water, rustic shacks and guards keeping the towns folk safe. It's a simple world long before any modern conveniences and the perfect setting for magic and things which haunt the shadows at night. I loved the descriptions in this book. They pull right into the scenes, bringing them to life in a very detailed way without crossing the danger of being overly descriptive. It's a world kids will easily get lost in and understand, although it's so different from ours today.

Emma is a girl who enjoys life. She's not willing to believe her grandmother's tales of fairies and magic, and is very smart for her age. At times, she seems a bit too mature for a ten-year-old (I'd personally place her more at twelve), but then she does have to face monsters that most of us would be scared to even dream about. Her sense of doing what is right and her bravery make her very easy to cheer for, and I don't think readers will have any trouble relating to her.

Even with monsters and dangers waiting to attack Emma and her family, there's a wonderful, wholesome feeling to the story. The family supports each other (even when they don't always agree with one another) and shows a lot of respect. The caring atmosphere radiates from the pages, making the entire family easy to like. And it's this sympathy which makes the reader fever for their safety when things start taking a turn for the worse.

Like in traditional fairy tales, the monsters in this story are not subtle. They are after blood and try to get it in violent ways. Although some parents might find it a bit much, I thought the author did a great job of not sugar-coating the situations but still managed to keep them appropriate for the intended age group. The topic of child abuse is also hit upon, and while Emma does a great job dealing with it, some parents might not approve of the total outcome.

Summed up, this is a lovely fairy tale told in the same manner our grandparents heard them. The monsters are harsh, the fantasy is rich and the heroes are as true-hearted as heroes can be. I wouldn't recommend this to more squeamish children (or parents who found the German style of fairy tales inappropriate), but I do think that kids 9+ will get lost in the magical land and wonder if they could brave such monsters themselves. 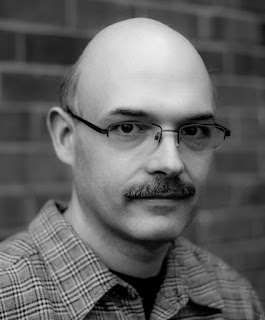 Born in a little town known as South Amboy NJ in 1973, Matthew has been creating science fiction and fantasy worlds for most of his reasoning life. Somewhere between fifteen to eighteen of them spent developing the world in which Division Zero, Virtual Immortality, and The Awakened Series take place. He has several other projects in the works as well as a collaborative science fiction endeavor with author Tony Healey.

Matthew is an avid gamer, a recovered WoW addict, Gamemaster for two custom systems (Chronicles of Eldrinaath [Fantasy] and Divergent Fates [Sci Fi], and a fan of anime, British humour (<- deliberate), and intellectual science fiction that questions the nature of reality, life, and what happens after it.

He is also fond of cats.

Curiosity Quills Press (CQ) is a small hybrid publishing company specializing in genre fiction of the highest quality. With 150+ titles in our catalog already and approximately 6 new books coming out each month, there’s never a dull moment at CQ. We work with major retailers such as Amazon, Barnes & Noble, and Audible to ensure that you, the reader, can find whatever you are looking for at your convenience.
Founded in 2011 by Eugene Teplitsky and Lisa Gus, CQ was initially a resource portal for writing and publishing, created in an effort to help writers, like themselves, survive the publishing industry. After rapid success, CQ morphed into publishing press that over time has solidified its share in the market. Now we spend our days searching for the next great escape!
Website | Facebook | Twitter | Goodreads