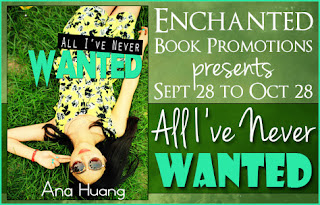 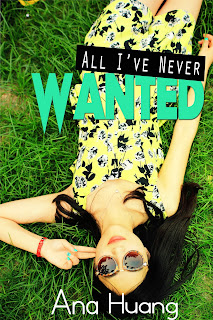 ALL I'VE NEVER WANTED
by Ana Huang
YA Contemporary
389 pages


The Scions were the four richest, most powerful guys at Valesca Academy, and they ruled the school with iron fists. Everyone wanted to date them or be them...everyone, that is, except Maya Lindberg, who just wanted to avoid them until she could graduate. She almost succeeded, until an ill-advised outburst on her part put her right in the Scions' path. Just like that, one became her fake boyfriend, one her unwanted matchmaker, one her guardian angel, and the one she couldn't stand the most? Yeah, he's her new housemate.

Ana Huang, better known as ACRL37 on Wattpad, primarily writes Young Adult and Romance. She started writing her first novel, All I've Never Wanted, when she was sixteen; it was originally inspired by the Asian manga Hana Yori Dango. Her second novel, If We Ever Meet Again, was loosely based on her own study a
broad experiences in college. Her stories currently have a combined view of over 20 million on Wattpad. Besides reading and writing, she also enjoys shopping, brunch, and traveling.