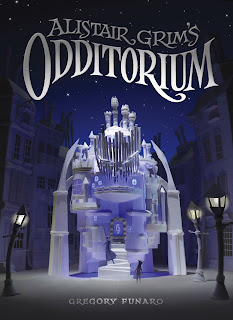 
Grubb, age twelve (or thereabouts), has never known anything beyond his miserable existence as a chimney sweep, paid only in insults and abuse by his cruel master. All of that changes the day he stows away in the coach belonging to a mysterious guest at the inn that he is tasked with cleaning. Grubb emerges from Alistair Grim's trunk and into the wondrous world of the Odditorium. Fueled by a glowing blue energy that Grubb can only begin to understand, the Odditorium is home to countless enchanted objects and an eccentric crew that embraces Grubb as one of their own. There's no time for Grubb to settle into his new role as apprentice to the strange, secretive Mr. Grim. When the Odditorium comes under attack, Grubb is whisked off on a perilous adventure. Only he can prevent the Odditorium's magic from falling into evil hands-and his new family from suffering a terrible fate. Grubb knows he's no hero. He's just a chimney sweep. But armed with only his courage and wits, Grubb will confront the life-or-death battle he alone is destined to fight.

Where many books start with action, ALISTAR GRIM'S ODDITORIUM eases the reader in with a more gentle beginning. The first pages are directed toward the reader, allowing the main character, Grubb, to directly introduce himself. It's very personal and gives young readers a  fairly good impression of Grubb's character, while pulling them into the his magical world. After this introduction, the narrative voice takes a flip, pulling away to allow enough distance so that the faster paced and adventure packed story can take hold.

Grubb 's had a rough and lacking childhood. This immediately pulls at the heart strings and caught my instant sympathy. Despite his tendency to make mistakes and cause mishaps, Grubb has a heart of gold. He doesn't realize it himself, but he is true hero material. I loved the character development in this story. It was easy to cheer for Grubb the whole way through even though, at other times, I had to shake my head whenever he dove into things without thought and made mistakes. Still, through him, so many wonderful messages about loyalty, honesty, bravery and friendship are brought across. Grubb is the kind of character which seems real enough to grasp and is hard to be forgotten after the story is done. He grows on you.

The author does a wonderful job bringing the world Grubb lives in to life. The descriptions are just enough to make the scenes vivid, but still allow the reader enough room for fantasy to let the world appear in their own fantasy. With fairies, magic, and all sorts of wonders, it's easy to embrace this odd place. With a mixture of mythical creatures, fairy tales and steampunk, there's room for tons of fantasy.

After those first 'getting to know Grubb' pages, the story shoots full speed into adventure and never lets go. There's danger and amazement heading from one page into the next, insuring that not even a second of boredom sneaks in for Grubb or the reader. Not only does Grubb have to figure out the secrets and history of the Odditorium and its inhabitants, but also must learn about the evil trying to overpower it. On top of all of this, Grubb must discover how the magic and mechanisms function. In other words, there's a lot for the reader to digest, making the 400+ page count understandable. Still, I'm not a huge supporter of books that thick for this age group and can't help but wonder if breaking it down into two books might have been a better choice. For those, however, who are willing to take on a book this large, I'm sure they'll enjoy every page and be caught up in the adventure.

A bonus point in this book are the illustrations. I really enjoyed the black and white pictures strewn between the pages and couldn't help but flip through them again after finishing the book. It was fun to 'see' the characters in action and was a great break between words.

Summed up, this is a lovely story packed full of adventure, wonderful messages and the kind of  fantasy which dreams are made of. The length is a bit heavy and will probably discourage most kids under the age of ten, but those willing to tackle it will enter a magical and unforgettable world. I can't wait to see where Grubb's adventures take him next. 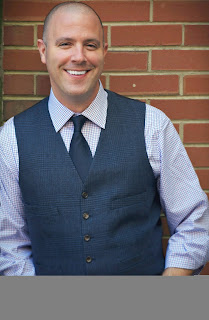 Funaro grew up in Cranston, Rhode Island, and wrote his first story, The Ghost in the Window, in the fourth grade. He considers this to be his finest work, but unfortunately it has been lost to time. Following high school Greg majored in theatre at the University of New Hampshire, and after various acting gigs, received his AM in Theatre Arts from Brown University and an MFA in Acting from the FSU/Asolo Conservatory. Greg teaches drama at East Carolina University, and is busy working on the next book in the Odditorium series. Please visit his web site www.gregoryfunaro.com.