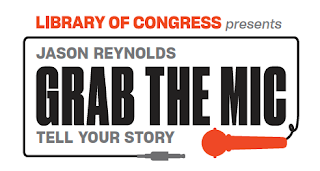 In his new role as National Ambassador for Young People’s Literature, Jason Reynolds will connect directly with young people online during the coronavirus pandemic, in collaboration with the Library of Congress, the Children’s Book Council and Every Child a Reader.

And here's exactly what this is about!

Today, Reynolds will debut his first initiative in support of his platform GRAB THE MIC: Tell Your Story—including a monthly newsletter for parents and educators focused on relevant topics of the day and a biweekly video series intended to inspire creativity in young people, titled “Write. Right. Rite.” Both will be hosted on Reynolds’ GRAB THE MIC Resource Guide at: guides.loc.gov/jason-reynolds/grab-the-mic.

In each “Write. Right. Rite.” video episode, Reynolds will address young people directly and provide helpful ways to express creativity through various prompts and activities. Videos will be posted twice a week (Tuesday and Thursdays at 10:30 a.m. EST) through April and May 2020, with more videos to be posted throughout the summer. Viewers are encouraged to share their projects on social media using the hashtags (#WriteRightRite and #tellyourstorywithjason).

“Due to the current changes in our way of life, my approach as Ambassador has had to change, too,” Reynolds said. “My role and goal is to get young people to express themselves and see value in their own narratives, and since I can’t, at the moment, physically come to them, I’ve created the ‘Write. Right. Rite.’ video series—short clips that offer fun and engaging prompts to help spark young people’s imaginations, which in turn will spark their expression.”

Starting April 14, GRAB THE MIC: Tell Your Story newsletters and videos can be found here:


And for all of you, who want to know not only more about Reynolds but about these organizations...


About Jason Reynolds
Reynolds is the author of more than a dozen books for young people, including “Look Both Ways: A Tale Told in Ten Blocks,” a National Book Award finalist that was named a Best Book of 2019 by NPR, The New York Times, The Washington Post and TIME. A native of Washington, D.C., Reynolds began writing poetry at age 9 and is the recipient of a Newbery Honor, a Printz Honor, an NAACP Image Award and multiple Coretta Scott King Award honors. His most recent book (with Ibram X. Kendi), “Stamped: Racism, Antiracism and You,” was a #1 New York Times bestseller.
During his two-year term as National Ambassador for Young People’s Literature, Reynolds plans to visit small towns across America to have meaningful discussions with young people. Through his platform, “GRAB THE MIC: Tell Your Story,” Reynolds, who regularly talks about his journey from reluctant reader to award-winning author, will redirect his focus as ambassador by listening and empowering students to embrace and share their own personal stories.

About the Library of Congress
The Library of Congress is the world’s largest library, offering access to the creative record of the United States — and extensive materials from around the world — both on-site and online. It is the main research arm of the U.S. Congress and the home of the U.S. Copyright Office. Explore collections, reference services and other programs and plan a visit at loc.gov, access the official site for U.S. federal legislative information at congress.gov and register creative works of authorship at copyright.gov.

About Every Child a Reader
Every Child a Reader is a 501(c)(3) literacy charity whose popular national programs include Children’s Book Week, the longest-running literacy initiative in the country, celebrating 101 years in 2020; the Children’s and Teen Choice Book Awards, the only national book awards chosen solely by children and teens; Get Caught Reading, a classroom poster project: and the National Ambassador for Young People’s Literature program, in partnership with the Library of Congress.

About the Children’s Book Council
The Children’s Book Council is the nonprofit trade association of children’s book publishers in North America, dedicated to supporting the industry and promoting children’s books and reading. The CBC offers children’s publishers the opportunity to work together on issues of importance to the industry at large, including educational programming, diversity advocacy, and partnerships with national organizations.
on April 14, 2020