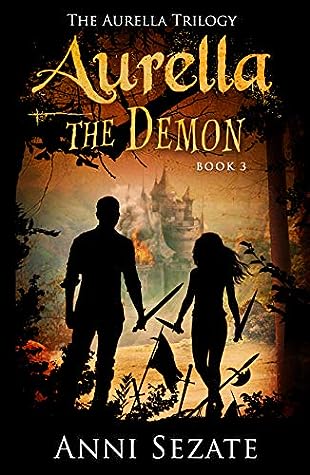 
After years of running to safety, it is now time to stand and fight. After a year of helping King Morton rid Dovice of anti-witch attacks, Aurella and Mavic’s troubles escalate to a full-fledged war. Danger and darkness plague them at every turn. No matter the horrors they’ve faced in the past, nothing will prepare them for the physical, emotional, and mental anguish of this final battle of manipulators and humans. No one will survive the fight unscathed and many will not survive at all.

I've followed this series from the beginning and have enjoyed every step of Aurella's adventure. This time isn't any different.

Aurella and her friends have not only helped King Morton to his crown and assisted him in ridding Dovice of the attacks on witches, but now, he requests them to aide in a trade agreement. Or that's what it was suppose to be. Instead, Aurella finds a fleet of naval ships about to attack the kingdom. Somehow, she needs to save the kingdom, but it's going to be the toughest thing she's ever faced.

I adore this series, especially since it's young adult and just right for the younger end...including tweens and even upper middle graders. Aurella is amazing. She's powerful, has been through a lot, proven herself more than could ever be expected, and yet, she's not arrogant. Nor does she ever flaunt her powers or even put herself in a position to benefit from them. She's simply a heroine, who's easy to root for and comes across like a pretty, natural teen.

The adventure starts on page one and doesn't let up until the very end. The author doesn't spend much time on descriptions, but rather lets the plot plow forward and keeps the entire thing at a pretty fast pace. While the characters are fairly sorted as good and evil, there are enough surprises to keep the reader at the edge of their seat. Aurella is up against very tough situations, and this keeps the tension high. The fact that she doesn't go it alone makes the read that much more fun and offers many characters to cheer for...or dislike.

This is a great read for fantasy friends, especially ages 12 to 16, who enjoy magic and other realms, but also enjoy characters, who don't feel as if they came from the middle ages or an overly literary world. It's simply a fun, adventurous read.