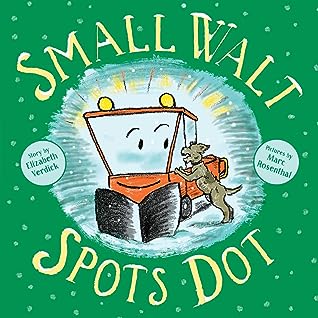 Small Walt meets a stray puppy in this irresistible companion to Small Walt, which Kirkus Reviews called “charming and endearing” in a starred review.

We’re Gus and Walt.
We plow and salt.
No job’s too small.
We give our all!

Walt and his driver Gus are plowing a parking lot when the see—whoa! What’s that? A blur of fur! Pup on the loose! Can snowplow Small Walt and driver Gus save the stray and save the day?

BOOK DEPOSITORY
MY TIDBITS
This isn't the first Small Walt book I've read, and it  (hopefully) won't be the last.
Small Walt is a snowplow with tons of heart. While he does have a driver, Gus, it's Small Walt who stars and steers in these tales. In this one, the two are plowing away when they discover something unexpected—a puppy! This poor stray pup can't survive in the snow all by itself. So, Small Walt is there to do his best and help as he can.
The illustrations in this book are fun, detailed and give tons for young listeners/readers to watch and follow. They colors are bright and bold, and the images portray exactly the scenes and emotions. In other words, this is the type of book which kids will want to pick up on their own and flip through the adventure again and again.
This isn't only a book for truck, tractor and snowplow fans, but is simply a warming tale. It's hard not to feel for the puppy as they find it...and what a lovely dog it is! The problem will be something kids can relate to and sympathize with. The solution comes with thought, friendship, a little adventure and tons of heart. It's simply a lovely tale and just right to read during the upcoming, colder months.
on October 03, 2020