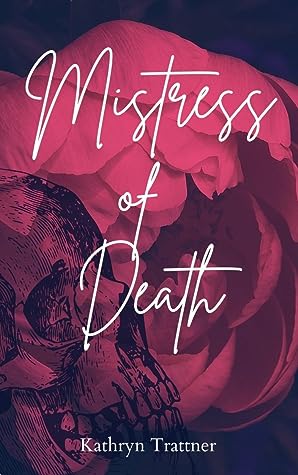 MISTRESS OF DEATH
by Kathryn Trattner
YA Fantasy
388 pages

Gabriel Mercer knows everything can be had for the right price. Raised in the shadow of the most famous assassin the city has ever known, she wants nothing more than to make a name for herself. Taking a solo contract from an up and coming politician seems like the easiest way to make it happen. But the contract comes with strings and soon Gabriel finds herself tangled in a web she won't be able to escape on her own.

Matthew Smith, a police officer rising in the ranks with a spotless record, discovers Gabriel at her lowest point; wounded and stranded on the wrong side of the river. He's drawn to her, unable to get past the uneasy feeling of familiarity, and saves her life against his better judgment.

As the web tightens Gabriel turns to Matthew for help. Their simple bargain, a life for a life, becomes harder to keep as their attraction grows. Soon Matthew realizes he won't be able to uphold his end of the deal. He isn't going to be able to let her go.

When the city begins to burn Gabriel will have to decide if she'll risk everything she's gained for a chance at revenge. Even if it means her future going up in smoke.

If you enjoy enemies-to-lovers romance with a hint of Romeo and Juliet, Mistress of Death might be your next favorite book!

BOOK DEPOSITORY
MY TIDBITS
Packed with emotion, this assassin is deadly, ruthless, and impossible not to love.
Gabriel is on the verge of becoming one of the most revered and feared people on the left bank, but when her first solo assassination stumbles, her whole life is about to take a turn. As Death's apprentice, she is more than feared but there are a few men who dare to want to possess her. She underestimates one of these, a mistake that could be the last one she ever makes.
I've enjoyed the books I've read from this author, and this one didn't disappoint. From the very first page, it's hard not to like Gabe and sympathize with her...and that while she ruthlessly kills. Her actions are horrid, and yet, the author makes her impossible not to side with and like. But this isn't really an emotional novel. It is action packed, cold-hearted, stuffed with intrigue, and cruel. Gabe's world is ruthless, and that is brought across with a bloody beauty, which is hard not to get lost in.
While this is a fast-paced read and there's never a boring moment, it isn't really only action, either. There's a lot of internal battles going on, romantic moments...well, ones which fit the tone, anyway...and mysteries to solve. Gabe is caught up in a dangerous game, which she only realizes after she's sunk too far to get out. While there are fight scenes and very tense moments, the author takes the time to let the reader accompany Gabe as she works through it. And there are some dark shadows, inside and out, to venture past.
I love how this one leaves off, too. It ties up all loose knots, but yet, leaves the future open. Just like life.
on October 14, 2020