Review: The Last Mirror on the Left by Lamar Giles 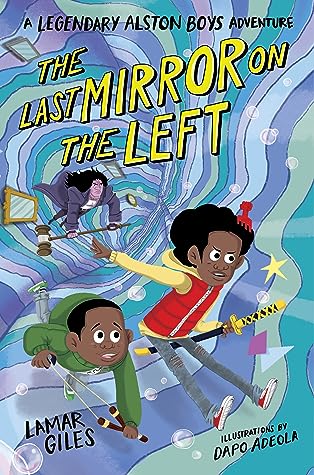 THE LAST MIRROR ON THE LEFT
by Lamar Giles
Illustrated by Dapo Adeola
Versify
Middle Grade Adventure
272 pages
ages 8 to 12
COMING...
OCTOBER 20th!!!
In this new Legendary Alston Boys adventure from Edgar-nominated author Lamar Giles, Otto and Sheed must embark on their most dangerous journey yet, bringing a fugitive to justice in a world that mirrors their own but has its own rules to play by.

MY TIDBITS
First off, this is the second book in a series, and it should be read as such, since Otto and Sheed take off where the last one ended. The background to the worlds, situations, and characters are all found in the first book.
Packed with fun character, great dialogue, and imagination at every curve, this is an exciting adventure which hooks and holds.
Sheed and Otto think their adventures have calmed down. They don't expect to be pulled off to court and accused of being criminals for the way they handled their last case. Plus, they discover that things didn't wrap up as nicely as they hoped, and they have to go hunt down the evil doer again. But not only are they thrown into a warped mirror world to go on their search, Sheed becomes ill, and the only cure supposedly holds consequences. Sheed might not ever be able to return to the 'normal' world again. Add spiders, people who look like those they know but aren't, disappearing towns, time travel, and a very tricky bad guy, and the adventure is anything but a sure win for these two.
I love the imagination and fun in this series. The author allows two, very normal boys to take off into the most obscure situations and lets them battle and solve as best they can. There's nothing really special about the two. They are as normal as young readers themselves, and this makes them very easy to connect to. The back and forth between the cousins is not only humorous and fun to read, it does a great job at bringing the reality of such relationships to life. The two are best friends and yet, they don't always get along or understand each other. Still, their loyalty for one another is inspiring and exactly how it should be. It's a duo that readers wish they could join.
The author does a wonderful job at twisting worlds, fantasy and time travel into a smooth and...well, mostly logical tale. The reasonings behind the world and those in it are clever, and easy to follow. For all it's quirkiness, things do hold their own strange reasoning and aren't just grabbed out of nowhere. But with all of the twists, unexpected run-ins, and strange meetings, there's nothing normal about a lot of things. And it's great that way.
I see readers, who love tension, excitement and a bit of ridiculousness enjoying this one quite a bit, especially the younger end of the middle grade spectrum. There are illustrations peppered in during the tale, which are always a bonus in my opinion. While I do see kids ages 7 to 10 enjoying this one more than the slightly older end, I am wondering how many will be willing to plop into a thicker read like this one. But those who do are in for an exciting read with smiles, heart and edge-of-the-seat moments, too.
And here he is... 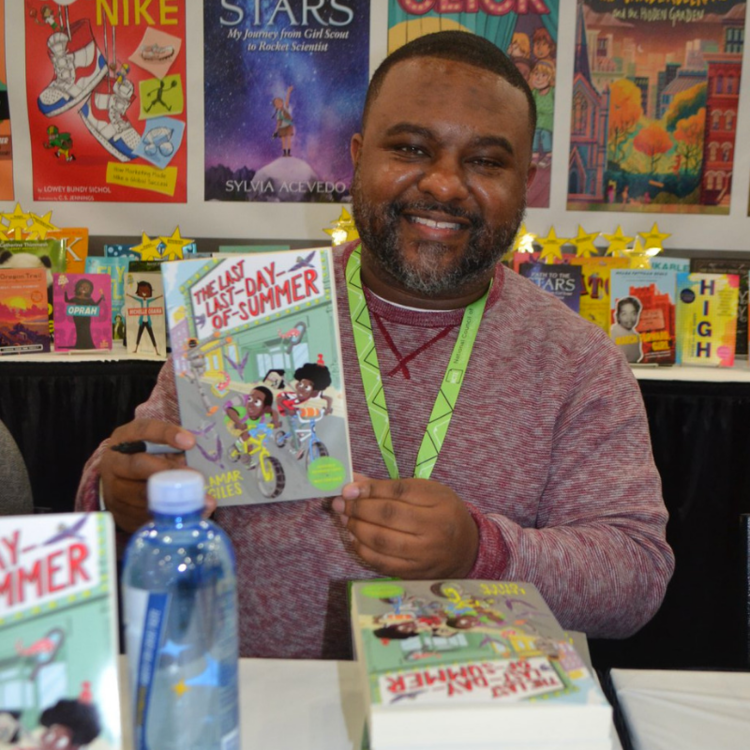 Lamar Giles is a well-published author and a founding member of We Need Diverse Books. Lamar has two novels forthcoming in 2020: NOT SO PURE AND SIMPLE his first Contemporary Coming-of-Age Story (HarperTeen/HarperCollins) and THE LAST MIRROR ON THE LEFT (Versify/HMH), the sequel to his 2019 hit THE LAST LAST-DAY-OF-SUMMER.

Lamar is a two-time Edgar Award finalist in the YA category, for his debut YA thriller FAKE ID (HarperCollins, 2014), and his second YA thriller, ENDANGERED (HarperCollins, 2015). His third and fourth YA thrillers, OVERTURNED (Scholastic, 2017) and SPIN (Scholastic, 2019), as well as his middle-grade debut THE LAST LAST-DAY-OF-SUMMER received glowing New York Times reviews, and was named to multiple Best Of lists, including Time Magazine, Kirkus Reviews, and Amazon. FAKE ID has been optioned by Sony Pictures.

Lamar is the editor of the We Need Diverse Books YA short story anthology FRESH INK (Random House, 2018), and a contributor to many YA and middle-grade anthologies including THREE SIDES OF A HEART (HarperCollins, 2017), BLACK ENOUGH: STORIES OF BEING YOUNG & BLACK IN AMERICA (HarperCollins / Balzer & Bray, 2019), THE HERO NEXT DOOR (Random House, 2019), HIS HIDEOUS HEART (Flatiron Books, 2019) and SUPER PUZZLETASTIC MYSTERIES (HarperCollins, 2020). He has published several short stories for adults.  You can see tv interviews with Lamar here, and here, and here, and in a truly fun “Fun Facts” short interview, created by HarperCollins.

You can learn more about Lamar and his works here!

Email ThisBlogThis!Share to TwitterShare to FacebookShare to Pinterest
Labels: Dapo Adeola, Lamar Giles, The Last Mirror on the Left