Review: A Curse of Gold by Annie Sullivan 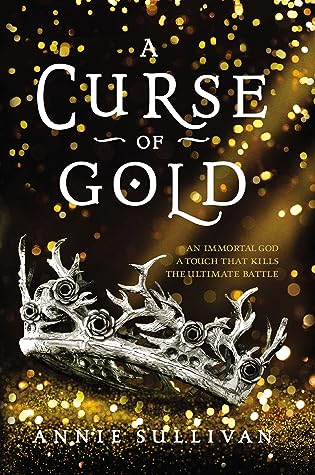 A CURSE OF GOLD
A Touch of Gold, Book Two
by Annie Sullivan
Blink
YA Fantasy

Curses and queens. Pirates and kings. Gods and magic. The final saga of a cursed queen, a vengeful Greek god, and a dazzling kingdom in the balance.After barely surviving thieving, bloodthirsty pirates and a harrowing quest at sea to retrieve her stolen treasure, Kora finds readjusting to palace life just as deadly. Kora’s people openly turn against her, threatening to overthrow her as heir to the throne—a cursed queen who has angered Dionysus. When Dionysus puts out a challenge to kill the girl with the golden touch and burn down her kingdom, it’s not just her future on the throne in danger. Kora’s life and entire kingdom are now on contract.As bold and brave as ever, Kora sets out to find Dionysus, the very person who is trying to kill her, on the mysterious disappearing island of Jipper. Kora has no other choice. If she wants to save her kingdom and have any chance at reversing her father’s curse, she will have to enter into a deadly game with Dionysus, the greatest trickster the world, or the underworld, has ever seen.

MY TIDBITS
With a dive into Greek mythology, this book twists and turns with the gods, Midas' touch, and a heroine, who is hard not to root for.
Kora is determined to break the curse set on her father (and by blood, her) thanks to Dionysus. But it's not an easy task as she runs up against creatures and gods alike. Luckily, she's not alone and even finds help in unexpected places.
Note: I did read the first book in this series and would highly recommend that the series be read as such. This second one can be read as a stand-alone, but it does take some time to sink in, and the characters will seem different if book one was read first.
Anyone who enjoys tales with twists on Greek mythology is sure to enjoy this one. The gods are sneaky and cruel as always, but there are several surprises too. Plus, I enjoy the fact that this is a retelling of Midas' Touch...a tale I haven't seen a lot of retellings on yet. The book is packed with action and doesn't leave a moment for boredom. Kora has her hands full, not only with the gods, but with her seafaring friends as well. I especially enjoyed Titus' place in this book... it was an interesting twist on his character and did help to make Kora even more likeable than before.
Romance. There is some, but it doesn't steer the entire plot. Not by any means. Kora's main goal is to break the curse, and that's what this tale is about. So, anyone hoping to smolder on this end, will be disappointed. Still, there is some there, and it adds a sweetness to the tale that would be missing otherwise.
While I enjoy Kora's adventure, I did find many things a bit rushed. Not in the sense that it was confusing or too quick, but rather, the action scenes and other moments could have simply been built out a bit more. So, I felt hurried along when I would have loved to linger.
But it's definitely worth a read to anyone who enjoys these types of retellings.

Tuesday, September 29th: What is That Book About – spotlight

Wednesday, September 30th: The Reading Corner for All and @thereadingcornerforall

Email ThisBlogThis!Share to TwitterShare to FacebookShare to Pinterest
Labels: A Curse of Gold, A Touch of Gold, Annie Sullivan