Review: The War of the Snakes by Julian Cheek 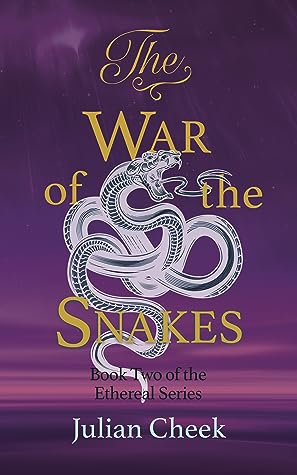 
Such is the gnawing question reverberating through Sam’s head as he battles with a dilemma, which refuses to be ignored.


In his dreams, he is always confronted by one simple point: Muanga-Atua exists! And for some un-asked for and un-wanted reason, he - Sam - is expected to save this place from the calamity that engulfs the people of the Turangai. Not only that, but he is also supposed to have some sort of incredible power by which he is expected to destroy both the Bjarke and their leader, Lord Elim, the Turangai’s oppressors.“


“But that is ridiculous! Right?”


Determined to ignore all that occurs in this so-called ‘dream world’, he does nothing. That is until one cold, grey, autumn morning a TV news flash captures a shocking series of events, which leads to one undeniable truth; what he has tried to ignore all along in Muanga-Atua has somehow incredibly exploded into his world and it is searching... Searching for him.


His do-nothing approach is just not good enough. Not now. He will have to go back to Muanga-Atua to seek out this power he was supposed to have obtained. Find the power, accept what it can do through him, and go out into that awful place to do battle with someone, or something that makes his very blood run cold.


But how? How can he go into this world and be all that the Turangai think he is, when he still cannot accept the truth? That he is ‘The One’. Sam, Wielder of the Staff of the Ethereals and saviour of their world. And now, apparently, of his own as well.

After the adventures of book one, Sam is a little more mature but not aware that he's about to be sucked up into an even larger problem. His dreams are making it clear that the fantasy world of Muanga-Atua truly exists, and the inhabitants are suffering. He is their only hope...which can't be true. When incidences in real life start connecting with the fantasy world, he realizes that it's really a problem and one he can't ignore. But saving a world and people isn't exactly something he's sure he can handle, especially since he can't even be positive he can save himself.

The author builds a very rich world. By connecting the familiar with the fantasy, there's a nice bridge to make it easier to sink into both. Sam comes across as a normal teenager and reacts in an understandable way. It's easy to root for him as he tries his best to sink into his role and battle, what is clearly, an evil force. The plot is engaging and drives forward from one interesting scene to the next, while making sure the tension remains the entire way through.

Fantasy friends who love rich worlds are sure to enjoy this one. It could have used a bit more editing and smoothing out in several spots, but the story still grabs enough to make this easy to oversee. There are moments where the pacing slows more than I like, but that's not rare for heavier fantasies. It will be interesting to see where the series goes next because Sam and his worlds have so much to offer. This is one fantasy fans can dive into and get lost in.

I am an architect by profession and have been practicing for almost thirty years. My passion for design and for creating lasting spaces has pushed me to the forefront of this field and some of my projects include Mercedes World in Brooklands, NikeTown in Berlin and Europe’s largest pharmaceutical project for Hexal in East Germany. Currently, I'm the Head of Design for a leading International developer.

It has long been my drive to challenge and test the people I work with, to demonstrate to their respective audiences how best to explain a concept. It is this vision that I hold closely to in my direction in creating stories and ideas such that the reader is also able to quickly understand what the story is about, and also to associate themselves with it and the characters within.
I live with my partner and our dog in Hampshire. Collectively, our four children have all grown up and flown the nest and we now enjoy seeing our own children learn themselves the tough lessons that life sometimes throws one. Mitch, my partner, is my inspiration and joy. She is my rock and we often discuss ideas for plot lines ( we both write) and both love bouncing ideas off each other.
The subject matter that forms the trilogy, “The Ethereal Series”, of which “The War of the Snakes” is book two, was brewing in my mind for quite a few years. I wanted to explore the idea where the “the good guy” doesn’t always win. I describe this as “In our lives, we all often hit obstacles that cause us to react, sometimes with frustration, rage, despair. Often, we carry this burden by ourselves, too afraid, and at times, too British, to share these with others”. The series, tries to unpick the various and numerous layers of the “onion skin” that Sam, the main protagonist, has built up around himself over the years, due to a tragedy he is unable to cope with. It is, hopefully, a story that a great many readers will associate themselves with, either from personal experience, or through friends who have gone through deep valleys, or may still be in them. The book is not intended to be too dark, so a few wobbly bridges are thrown it at times so that the reader is reminded that all is OK ultimately.”
As a Christian, my faith is important to me, as are my beliefs. A life message I have learned and now try to carry around with me, is that every person is precious. It does not matter what creed, race, sexual orientation, religious standing or place in society one finds themselves in, rather what does matter, is that when all the “stuff” is peeled away, whether self-built or applied by others, God sees us for who we really are; which is a beautiful creation, made wonderfully, and with care and attention. I try to share this in my outlook and acceptance of others. This lesson has been taught, often through extreme tragedy and loss, as well as times of great joy. These are reflected in the various scenes Sam and his family find themselves in.
The bright times include when I spent my youth growing up in South Africa. As a child growing up in what, for me, was a beautiful country, where kids did not differentiate between skin colour or culture, the pure exhilaration of being able to explore the mountains, the lakes and rivers and the landscapes, often at great peril to life and limb, cemented a rich tapestry in my life that helped me to look outward and see how peaceful things are, when one is able to turn one’s head to one side for a moment and smell the flowers.
A darker side was the struggle when my two children were diagnosed with an incredibly rare genetic disorder of which, only 12 have been recorded. The first child was born in Germany and whilst I could speak German, the medical and technical issues around the condition and trying to speak to doctors about it, led to extreme periods of sadness. Often, I was told by one of the doctors that, in their opinion, my daughter had this or that condition, and would probably die before they were 4. The angst that came from this, only to find out some months later, that actually, the doctors were shown to be wrong and that my daughter now had “this” condition (probably), and that life expectancy was not very good, was beyond description.
In this darkness, a light was switched on by the healing touch of a wonderful church, and of being introduced to many other children who were in a much worse condition than my daughter. I learned that it was OK to be scared and afraid and worried, but that if I looked outside for a moment, all was at peace. The children are now both leading active “normal” lives and are 24 and 21 respectively and they both delight and frustrate as children do. I wouldn’t swap them for the world. Valuable life lesson there.
Both me and Mitch enjoy painting. For me, my forte is portraiture and I find that by studying this subject matter, it helps me to see the nuances that make up a person’s face or a setting for a scenic composition. It is a challenge to try to capture the character. A lesson I take with me when writing.
In conclusion, if there was a strap line I would want to adopt or uphold, it would probably be, “Laugh when there is no reason to, and never forget to stop looking out. Peace reigns even in the worst of chaos!” I trust that the reader will immerse themselves in “The War of the Snakes” as well as my first published novel of the series, “The Awakened” and be there ready to support me and the travails of Sam when book three comes to print in Autumn 2021. 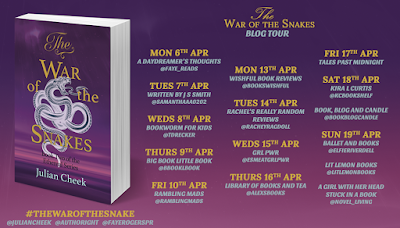 Email ThisBlogThis!Share to TwitterShare to FacebookShare to Pinterest
Labels: Ethereal Series, Julian Cheek, The War of the Snakes