Review: The Story of Civil War Hero Robert Smalls by 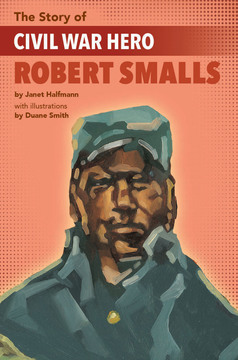 This exciting entry in Lee & Low's "Story of" line of chapter-book biographies introduces readers to Robert Smalls, an enslaved steamboat wheelman who commandeered a Confederate ship during the Civil War and escaped with his family and crew to freedom.
Growing up a slave in South Carolina, Robert Smalls always dreamed of the moment freedom would be within his grasp. Now that moment was here.
Robert stood proudly at the Planter's wheel. Only seven miles of water lay between the ship and the chance of freedom in Union territory. With precision and amazing courage, he navigated past the Confederate forts in the harbor and steered the ship toward the safety of the Union fleet. Just one miscalculation would be deadly, but for Robert, his family, and his crewmates, the risk was worth taking.
The Story of Civil War Hero Robert Smalls is the compelling account of the daring escape of Robert Smalls, a slave steamboat wheelman who became one of the Civil War's greatest heroes. His steadfast courage in the face of adversity is an inspiring model for all who attempt to overcome seemingly insurmountable challenges. This chapter book edition includes black-and-white illustrations as well as sidebars on related subjects, a timeline, a glossary, and recommended reading.

This book is part of the 'Have You Heard the Story Of...?' series, a series which highlights world-changing figures, who also belong to one of the minority groups here in the U.S.. This was the first book I've had a chance to read in the series, and it gets a big thumbs up from me.

Robert Smalls was born a slave before the Civil War, who, thanks to some interesting twists in his life, was able to work the docks and found his way to learn how to pilot a ship. His talent not only gained him respect but lead him to much greater places than he could have ever dreamed...especially after such extremely humble beginnings.

History can be so interesting if told correctly, and this book definitely accomplishes that. At less than eighty pages, it's not daunting at first grip...something reluctant readers will appreciate. The print itself is large, making it easy to read, and the book is not only divided up into interesting chapters, which mark the various stages of Robert Smalls life, but also throw in extra segments, which explain aspects of the time, which don't directly deal with Robert Smalls but rather deepen the understanding of what he faced or what he was working with. The entire text isn't written as dry facts, either, but allows Robert Smalls to come across as a real person and enables the readers to connect with him as an individual.

The illustrations in this book are a lovely addition. Not only do they help bring Robert Smalls to life, but also make it easier to picture the world he lived in. There are also maps, sketches and other visual aides, which assist in understanding what is explained in the text. Since these decorate almost every page, it's nice to flip through and simply gaze at them—another aspect which is sure to appeal to those with a shorter attention span.

At the end of the book, there's a timeline of Smalls' life, a glossary and a list of recommended reads for anyone wanting to learn more.

For those curious about Robert Smalls or the history of the Civil War or slavery, this read holds a lot of facts and information. For those who are discovering the era for other reasons, this is an interesting way to attack it, and it's hard to come away without knowing a few more details and gaining a better understanding of the time and Robert Smalls. In any case, it's not a boring, historical read but brings an historic figure to life in a way even those who aren't enthused about history will enjoy.

The Author...
JANET HALFMANN is the author of more than forty books for children, including Lee & Low's Midnight Teacher, which Kirkus called “An excellent homage to an African-American woman who taught ahead of her time” in a starred review. When she’s not writing, Halfmann enjoys working in the garden, exploring nature, visiting new places, especially wildlife areas and living-history museums, and watching movies. Halfmann lives with her husband in South Milwaukee, Wisconsin. Visit Janet Halfmann on the Web at janethalfmannauthor.com.

The Illustrator...
DUANE SMITH is an artist, illustrator, and graphic designer with a degree from Pratt Institute in New York City and a Master’s in Illustration from the Fashion Institute of Technology. His wide-ranging works have been featured in periodicals, books, movie storyboards, and galleries. Smith also works in graphic design and interactive media development, and splits his time between homes in Brooklyn and Albany, New York. Visit him online at http://wwwdsmithillustrationcom.blogspot.com.
on April 28, 2020