Review: Just Between Us by Meredith Jacobs and Jules Jacobs 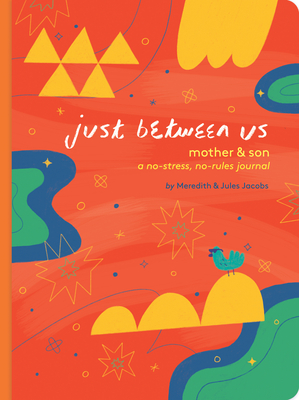 
The bestselling journal series, Just Between Us—now for moms and their sons.This thoughtful keepsake journal is the perfect place for a mother and son to share stories and dreams, hopes and fears.Advice, guidelines, and prompts by author Meredith Jacobs and her son pave the way to discussing everything exciting and scary about growing up, from friendships and school to positive masculinity. With plenty of free space to write about whatever's on their minds and fun pages for drawing pictures and making lists, this journal will open the lines of communication and help strengthen mother-son relationships.• In the age of #metoo, conversations between mothers and their sons are even more important—this journal allows a safe space for sharing.• Perfect Mother's Day gift!• A great way to approach and share difficult challenges that boys face growing up, and share important milestones and memories.Written by a mother (Meredith Jacobs, the award-winning coauthor of the Just Between Us series) and her son, Jules Jacobs.

Weaving fun with imagination and a little doodling, this journal makes opening up between mother and son anything but an uncomfortable chore.

This is not the first journal by this author, and that becomes clear the minute the cover is opened. Since a journal is a rather private ordeal, the authors don't allow parents and their children to dive in blindly but does some opening up themselves. The first pages explain why the son and his mother wrote this book, while adding a few thoughts and experiences of their own. Then, rules or guidelines are given for the mother using this book, and it explains why these guidelines are for her and not the son.

After this introduction, the journal begins, and with it, the fun part. While I was a bit skeptical (I often eye such books and shake my head), this journal actually surprised me. Its purpose is to open up conversation blockages between moms and sons, but never does it do so with the usual, emotional, psychological attempts at depth and feelings. Instead, the prompts in the journal only hit upon topics such as heroes, comics, foods and so forth. The more 'meaningful' themes such as masculinity are approached with the same twist of fun, making sure that those odd, shift-in-your-chair situations never arise.

This isn't a book which puts kids on the spot, either. For most of the journal, the left side is for mom's opinions and the right is for the son's. Mom writes about the craziest thing which has every happened to her on one side (for example), and the son writes down his on the other side. Several exercises include both, such as creating a comic strip together. There are more than just a few empty pages sprinkled between the topics for random scribbles, thoughts or whatever.

I can see this book as a fun thing for moms and sons to do together.

Meredith Jacobs is an award-winning columnist and author. She lives in Rockville, Maryland.Jules Jacobs is a student at George Washington University, and was the head of the high school advisory committee for the Obama administration's It's On Us initiative.
on April 11, 2020

Email ThisBlogThis!Share to TwitterShare to FacebookShare to Pinterest
Labels: Jules Jacobs, Just Between Us, Meredith Jacobs, Mom and son journal