Review: A Field Guide to Getting Lost by Joy McCullough 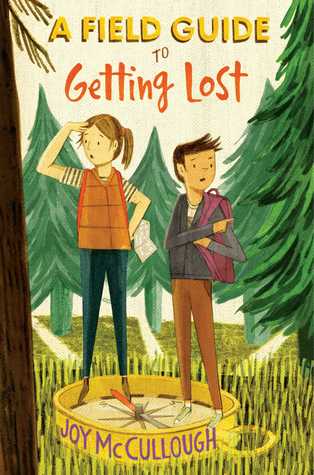 A girl with a passion for science and a boy who dreams of writing fantasy novels must figure out how to get along now that their parents are dating in this lively, endearing novel.
Sutton is having robot problems. Her mini-bot is supposed to be able to get through a maze in under a minute, but she must have gotten something wrong in the coding. Which is frustrating for a science-minded girl like Sutton—almost as frustrating as the fact that her mother probably won’t be home in time for Sutton’s tenth birthday.
Luis spends his days writing thrilling stories about brave kids, but there’s only so much inspiration you can find when you’re stuck inside all day. He’s allergic to bees, afraid of dogs, and has an overprotective mom to boot. So Luis can only dream of daring adventures in the wild.
Sutton and Luis couldn’t be more different from each other. Except now that their parents are dating, these two have to find some common ground. Will they be able to navigate their way down a path they never planned on exploring?

Sutton's parents are divorced, and her mother is constantly away studying penguins. Like her mom, Sutton loves science, but unlike her mom, she's into robots and programming—and she's fairly talented at it too. But when her mom announces she won't be there for Sutton's birthday, and her father gets more serious with the woman he's been dating, Sutton's not sure her life's programming is on the right track.

Then there's Luis. He's allergic to everything...or so it seems. His mom does everything in her power to protect him, but he still manages to stumble from one allergic reaction into the next. When his mom introduces him to her to the man she's dating and his daughter, Luis is willing to give the new people a try, but Sutton is tighter than the magical wards guarding a super treasure. He's not sure he can break through.

This was such a fun book to read! Sutton comes across so single-minded, as she only thinks about her robot, while trying to drown out the thoughts of troubles with her mother. It almost makes her, at times, a bit robotic herself. It's hard not to sympathize with her and her unease at dealing with everyone's relationships. Because everyone feels a little lost sometimes. Luis is a mess with his allergies, and yet, he's got the constant glow of hope...although it's not always bright and clear. His mishaps are the kind which could be almost funny if he didn't always end up with another dangerous allergic reaction. It's hard not to feel for him, and definitely easy to cheer for him as he tries to reach beyond his fears. In other words, both of these characters to hard not to like.

While the tale revolves around Luis's and Sutton's battle to get beyond their own worlds and deal with the new situation, it packs loads of gentle humor and tons of hope. Each page holds something new, making it a hard book to put down. Many young readers will identify with the two characters, and hope they both find their way.

Joy McCullough is not outdoorsy and she has a terrible sense of direction. She did climb a Guatemalan volcano one time, and she has hiked through Discovery Park. But she much prefers to stay inside, writing books and plays from her home in the Seattle area, where she lives with her husband and two children. Her debut novel Blood Water Paint was longlisted for the National Book Award and was a William C. Morris Debut Award Finalist. Visit her at JoyMcCullough.com

Email ThisBlogThis!Share to TwitterShare to FacebookShare to Pinterest
Labels: A Field Guide to Getting Lost, Joy McCullough