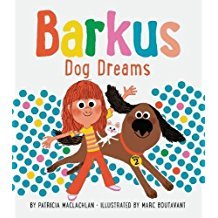 Barkus is back! With new tricks. New friends. And lots more fun.
Praise for Barkus:
"Fans will be begging for more."-The Horn Book Magazine
"The charm is infectious."--The New York Times
"Will appeal to fans of the Henry and Mudge series as well as to the younger picture-book audience."-Kirkus Reviews
The lovable Barkus and his lucky young owner romp through the pages of this delightful series from Newbery Medal–winning author Patricia MacLachlan. The simple text told in short chapters is just right for children ready to take their first steps toward reading on their own.

(Note: I did not get the chance to read the first book in this series, but that wasn't a problem. Each book can be read as a stand-alone.)

Barkus might appear to be an ordinary dog, but he packs more than a few surprises and brings delight where ever his paws pass by.

Five chapters appear in this book, and each one brings along a new, surprising adventure for Barkus and his best friend, a cat named Baby. Told from the owner's point of view—a young girl—it's impossible to predict what Barkus will be up to next. But one thing is guaranteed, the end result is not what the reader might expect it to be.

Barkus comes across as an ordinary, loving dog. Even his very close friendship with a cat, which might raise an eyebrow or two, isn't completely out of the ordinary. After all, cats and dogs can get along in real life. The adventures also start out as usual events, ones which could happen to anyone—Barkus visits the vet, the neighbor gets a dog, and there's a festival at the park. Even when the adventure gets underway, it's nothing really far-fetched. Fun and entertaining, but seemingly based solidly in reality. Then, the surprise twists hit, subtle and yet making it clear that Barkus is anything but a normal dog.

The text fits nicely to those readers, who are learning how to reader slightly larger stories on their own. While most of the words are very easy to identify, a few more difficult ones are sprinkled in to help expand the vocabulary but not enough to frustrate the reader. The illustrations support the story and the plot, while adding personality to Barkus and his friends along with a charming dash of humor. It makes for a gentle and fun read, while allowing those reader skills to grow and improve.

The Author...
Patricia MacLachlan is a versatile and prolific author whose titles range from picture books to novels, including the Newbery Medal- winning Sarah, Plain and Tall. Barkus was inspired by the imagined adventures of her neighbor's dog.


The Illustrator...
Marc Boutavant is an internationally acclaimed illustrator. His work has been featured in The New York Times and The New Yorker as well as numerous children's books. He lives in Paris, France.
on April 30, 2020