Review: Rising Water - The Story of the Thai Cave Rescue by Marc Aronson 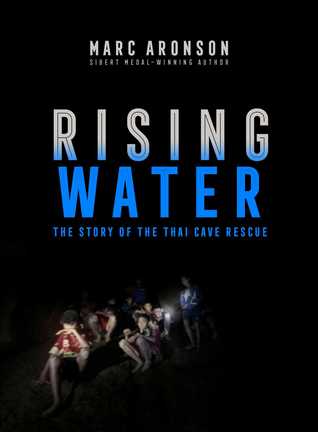 
The incredible true story of the twelve boys trapped with their coach in a flooded cave in Thailand and their inspiring rescue.On June 23, 2018, twelve members of the Wild Boars soccer team and their coach were exploring the Tham Luang cave complex in northern Thailand when disaster struck. A rainy season downpour flooded the tunnels, trapping them as they took shelter on a shelf of the dark cave. Eight days of searching yielded no signs of life, but on July 2 they were discovered by two British divers. The boys and their coach were eventually rescued in an international operation that took three days. What could have been a terrible tragedy became an amazing story of survival.Award-winning author Marc Aronson brings us the backstory behind how this astounding rescue took place. Rising Water highlights the creative thinking and technology that made a successful mission possible by examining the physical, environmental, and psychological factors surrounding the rescue. From the brave Thai Navy SEAL who lost his life while placing oxygen tanks along the passageways of the cave, to the British divers that ultimately swam the boys to safety, to the bravery of the boys and their coach, this is the breathtaking rescue that captivated the entire world.

The difficulties, tension, hope and fears of what happened at the Thai Caves comes to life along with many details and explanations of what the rescuers and boys truly faced.

The Thai Cave rescue of the boy's soccer team brought the world together as they not only followed the rescue attempts through the media, but many flew in to offer their support and real help. The background of the caves and the boys offers insight and understanding as to their original adventure, while many more explanation help the reader to understand how the accident occurred, and even more so, what trails the rescuers faced and how they overcame these.

The author's thorough and care in research shines through these pages as he hits various angles and aspects surrounding this well-known event. It begins with background information about the caves themselves, which clarifies why the team was in the caves. Then, a brief but clear summary is given of each boy as well as a more detailed explanation about the soccer team and it's coach. This part alone offered interesting insight and is sure to connect young readers with the boys. But then, with every dip into information, the author grounds the happenings into real life and makes it clear how intense the situation was—and how normal these kids were.

Young readers as well as adults will be pulled into this book, thanks not only to the information but also to the moments of well laid and real tension. While some moments read like a story, most pages come across like a newspaper/magazine article. A lot of this has to do to the speed with which it was written. The author admits to having to complete the book in a tight time crunch. Unfortunately, this shows. While the information is extremely well done and very interesting, it sometimes comes across a bit pasted together. Some areas gained quite a bit of depth in explanation, while others were mentioned and almost forgotten. The writing itself illustrated this too, as some passages contain a fairly high vocabulary, where others fall back and explain or speak down to the reader (in comparison).

Despite these problems, the book is very interesting and will pull readers in. The care in the research does come across well, and readers will learn quite a bit while staying engaged in the situation. In other words, I can recommend this to upper middle graders and tweens.

And here he is...
Marc Aronson is the acclaimed author of Trapped: How The World rescued 33 Mines from 2,000 Feet below the Chilean Desert, which earned four starred reviews. He is also the author of Sir Walter Raleigh and the Quest of for El Dorado, winner of the ALA's first Robert L Sibert Award for nonfiction and the Boston Globe-Horn Book Award. He has won he LMP award for editing and has a PhD in American history from NYU. Marc lives in Maplewood, New Jersey, with his wife and son. You can fisit hin online at MarcAronson.com

Email ThisBlogThis!Share to TwitterShare to FacebookShare to Pinterest
Labels: Marc Aronson, Rising Water, The Story of the Thai Cave Rescue