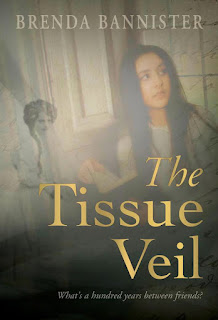 
What if you discovered a hundred-year-old diary under your floorboards - and then found references in it to yourself? Or if you lived in 1901, yet kept seeing glimpses of a girl from modern times? And what if both of you had problems that only the other could really understand? Emily and Aysha live in the same Stepney house and an inexplicable link develops between them, fuelled by Aysha's discovery of a journal and Emily's sightings of a 'future ghost'. Each takes courage from the other's predicament - after all, what's a hundred years between friends?


Excerpt from Chapter 14 of The Tissue Veil.
Aysha hopes to go to a good university, but her mother and brother have an arranged marriage in mind. Derrick, a fellow 'A' level student at her college who is clearly interested in her, has arranged a group visit to an ice-rink...

Eight students – five girls, three lads, mostly from their history set – bundle onto the upper deck of the bus. Billie has brought her boyfriend Chris, from the photography course. Karen sits beside Aysha, while Derrick spreads himself across the double seat behind them, one hand gripping the rail in front so that when Aysha leans back his broad knuckles knead her shoulder blades. When the bus stops at the traffic lights, she catches sight of Mo amongst a group of white-capped men waiting to cross the road, presumably returning from Friday prayers. The upstairs window is grimy, but she still ducks her head.
“When do we have to be there?” she asks Derrick. He unfolds a leaflet. “They close to re-do the surface after the midday session. We’re in plenty of time for the three till five slot.”
Across the aisle, Billie has slung her skinny legs across her boyfriend Chris’s lap, while he is tracing the seam of the skin-tight jeans along her thigh. Billie reaches up and whispers something to him and they both glance in Aysha’s direction and smirk.
“Reckon Del Boy’s in luck.”
“Shut your face, Billie!” Karen snaps.
Aysha leans forward and stares rigidly ahead; the other students in the party look embarrassed. As the bus swings around the corner towards Aldgate Station, Derrick gets up and gestures to the girls to go ahead of him. He stands as tall as the height of the bus allows, then turns to say something to Billie’s boyfriend before following them downstairs. The three of them cross the road, then hurry down Houndsditch towards Broadgate, leaving the others to follow. They are first in the queue for skates when the ice reopens at three.
“Bit small, isn’t it?” Karen comments. The rink is situated in a raised circular enclosure, approached by wide stone steps. An outer ring of shops and restaurants surround it at a lower level and the whole complex is overlooked by tall office blocks.
“Yeah, it’s nothing like the Lee Valley one, “ Derrick says.
“The one at the Natural History Museum is bigger but it’d take too long to get there.”
Had he chosen the nearest rink to make it easier for her to come? It seems plenty big enough to Aysha, who can’t imagine doing anything except picking her way around the side, holding onto the barrier. Figuring out how to move seems to require part of her brain she hasn’t used before. She tries a few shuffling steps, but then Karen and Derrick take one of her arms each and draw her forward.
“Keep your feet on the ice or we’ll drag you over.”
“Just glide.”
She lets herself go and they pull her into the centre of the rink. The sun has come out and the ice sparkles. The other two change direction, but she doesn’t understand how to do this. She feels her legs shoot forward, certain she’s going to bring them all down, when an arm comes round her waist and holds her steady. Karen lets go her grip and Derrick alone guides her across the ice. Her cheek brushes against the cold zip of his hoodie and she catches a spicy waft of aftershave.
“Try to bend your knees,” he says. “I won’t let you fall.”
He crosses the ice still holding her and deposits her safely at the edge. She watches as he skates back into the centre, performs a figure of eight, then picks up speed and goes into an extended spin. A few city workers, sauntering back from a liquid lunch, send up a ragged cheer and Karen mouths a wow. Billie’s face shows grudging admiration and her boyfriend claps Derrick on the shoulder when he skates back to the edge.
“Where d’you learn to do that, mate?”
“I had lessons when I was a kid.”
“Why did you stop?” Aysha asks.
“Took up football instead,” he grins. “Got picked as goalie for the school team. Plus I knew there were plenty of skaters better than me. I haven’t forgotten it all though, have I?”
He looks down at her, waiting for approval.
“No, you were really good out there.”
He beams, and takes both her hands, gliding backwards on the ice. This time she trusts him, follows his directions, begins to learn how to shift her weight and move her feet. If he lets me go, I’ll fall, she thinks, but I’m doing it, I’m skating! The cold air floods her lungs like a drug. 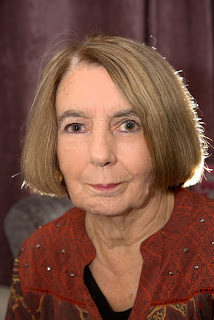 Brenda studied English at university and later qualified as a librarian, working in various educational settings from schools to higher education. Moving from London to Frome in Somerset in 2010 proved a catalyst for her own writing as she joined local fiction and script writing groups. She has had a number of short stories published, plus short plays produced in local pub theatre, but all the while was incubating a story based in the area of Tower Hamlets where she had worked for eighteen years.  This germ of a story became 'The Tissue Veil'.
Brenda is a founder member of Frome Writers' Collective, an organisation which has grown from a handful of members to over a hundred in the past four years, and helped set up its innovative Silver Crow Book Brand. She is also the current organiser of the annual Frome Festival Short Story Competition. A lifelong reader, Brenda rarely follows genres, but enjoys modern literary fiction, historical fiction, classics and the occasional detective novel. The latest Bernard Cornwell might be a guilty pleasure, but she'll be even more eager to get her hands on Hilary Mantel's final instalment of Thomas Cromwell's story. 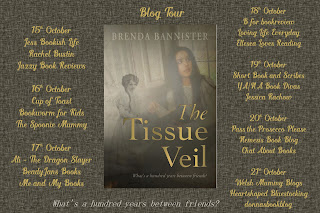 Email ThisBlogThis!Share to TwitterShare to FacebookShare to Pinterest
Labels: Brenda Bannister, The Tissue Veil, YA Historical, YA Paranormal