Review: Wrath of the Dragon King by Brandon Mull 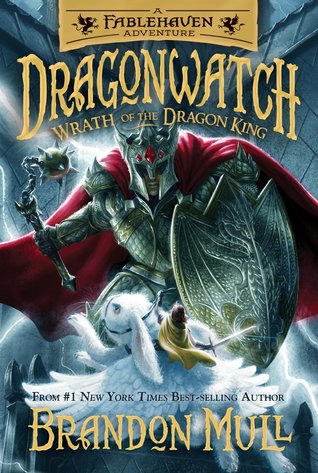 
War has come to the dragon sanctuaries of the world and nowhere is the danger more intense than at Wyrmroost. After a humiliating defeat at the hands of Kendra and Seth, Celebrant, King of Dragons, prepares to unleash his fury and take control of his native preserve. Armed with information from a new ally Ronodin, the dark unicorn Celebrant seeks a legendary talisman the dominion stone.

However, the powerful stone is protected by a cursed castle. Upon entering the castle fortress, an unyielding power strips all magical beings of their power and forces Celebrant to take his human avatar form. Kendra and Seth must enter the cursed castle as well. The race is on. Will the two young caretakers rally enough support from the creatures of Wyrmroost against the greatest threat the magical community has faced in ages? Can they foil Celebrant's plan and beat him to the mighty dominion stone? Or will all hope be shattered by the wrath of the Dragon King?

Note: I did not read the first book in the series, which was a mistake. The story in book two takes off from where book one left off, and without reading book one, there is too much missing information to easily slide into the second one. In other words, read this one as a series.

Also, I only received the first 100 or so pages of this title to review. So, I can only review this first section. Whether or not the rest of the book holds up to these first pages, or whether or not the many upcoming twists and turns hold all they should/could, isn't something I can judge or comment on.

Seth is determined to overcome the magical and instant fear which strikes him and all other humans when faced with a dragon's stare, but things are going so well. Kendra might be doing better with her position with the fairies, but she's more than aware of the approaching war, which she and Seth must try to thwart off before it destroys the world. But there is not an easy way to hold off dragons, who have been living in, what they consider, prisons and now, want their freedom...and possibly to rule the world. When Seth and Kendra receive an invitation to the Dragon King's palace, they can't refuse but they can't agree either, since they know it is a trap. For the Dragon King wants to see Kendra dead.

This is a fast-paced, exciting adventure which lets dragons, fairies and magic flow with rich imagination. Each and every character is facing their own dilemmas, ones which make them sympathetic and easy to connect to. And it's these well woven sub-plots which support the main story and give it so much depth and intrigue. This is not a book to easily put down, but each page brings something new and adds to the excitement. There's hope, but it's only a shimmer which makes the characters to cheer for. They have their faults and they have determination as well as wonderful moral compasses. They know what's right and they will fight for it even when the odds are stacked against them.

While the danger is ever present, the author has built in a touch of humor and fantastical moments to keep it from growing to dark and to waken the imagination. The scenes are never overly described, but allow the reader to dive into the fantastical realm. There's moments of wonder, discovery and fascination, making this a tale found in dreams.

These first pages definitely grab and set the stones for a great adventure. Whether the rest of the book holds up to it's introduction, I can't say. But I'd be more than willing to read the rest to find out.

Brandon Mull is the #1 New York Times bestselling author of the Fablehaven series and Beyonders series. He travels the country visiting schools, promoting literacy, and sharing his message that "Imagination Can Take You Places." He lives in Salt Lake City, Utah, with his family.

Dragonwatch, Book 2: Wrath of the Dragon King (Shadow Mountain Publishing) will be available everywhere books are sold on October 23, 2018.