Review: Which Animal Is Fastest? by Brian Rock


After Cheetah wins a 100-yard dash, King Lion is ready to crown him the world's fastest animal but other animals, even turtle, claim they are fastest in their own realms. Includes activities, facts about animals, and information about habitats.

This book surprises with an intriguing mix from story to wonderful facts.

The lion, as the king of the animals, declares a race to see which creature may be deemed as the fastest. The cheetah is the first to cross the finish line, but before the lion can declare him the official winner, the other animals begin to complain. What if the race went on for several miles? Would the cheetah still win? And what about animals with two legs or those who are faster in the water than on land? A quarrel soon breaks out, one that the lion must somehow find a wise way to solve.

The first page bursts out with dry, savanna appeal and sets the perfect stage for the wild race. The illustrations portray the animals with a sense of natural beauty, while still incorporating a tad bit of human mannerisms to flow right in with the story. It's a treat to glance through the pictures, and young listeners are sure to find their favorites.

With a simple plot, the story delivers a bit of excitement while allowing the needed animals to come into play and hint at their own talents. The argument builds, some complaints more ridiculous than others, but it's this impossible atmosphere which adds a subtle humor. Especially the reaction of the lion with his paw over his face had me and my kids giggling. It's easy to identify with his predicament. The solution he comes up with isn't as amazing as it could be, but it works for the intention of this book.

While the story does add fun, the real grabber comes in the last pages as the fastest animals on Earth are identified in a graphic and almost scientific manner. And the list is surprising. While the cheetah might be the fastest sprinter, there are other creatures which hold records in their own areas. It's this type of information which kids devour, especially when enjoying a story first which they can then use to identify the information with.

The text in the story isn't difficult and, in many ways, appropriate for younger audiences as a read aloud, where as the information itself is more directed to slightly older audiences...ages 6 to 10. Even then, it's a great combination as readers can read through the tale easily like a light and fun introduction to the heavier and interesting material at the end.

As an extra bonus, the book is also available in Spanish, and there are several exercises at the end to help deepen the knowledge and understanding of the animals mentioned in the book. There is also a website mentioned, where readers can head to if they'd like more information.

Summed up, this is a wonderful combination of story and information, which easily draws even more reluctant readers in and opens them up to a few animals facts they probably didn't know before.

Brian Rock is not very fast. He can barely outrun a sloth. But he does enjoy writing children’s books at his own, measured pace. In addition to Which Animal is Fastest?, Brian has written The Deductive Detective for Arbordale, Martian Mustache Mischief, Don’t Play with Your Food!, Piggies, and With All My Heart. He received a master’s degree in Children’s Literature/Creative Writing from Hollins University. For six years, Brian worked in the Chesterfield County public school system teaching at-risk students. Visit Brian’s website at www.brianrock.net.

Carolyn Le was born in Vietnam and grew up in California. She dreamed of becoming an illustrator and, after graduating from Otis College of Art and Design with a BFA in Illustration, she illustrated her fi rst picture book, Clarence and the Traveling Circus. Carolyn’s watercolor paintings are a reflection of the beauty she sees around her, from the bright sunny Southern California days to the memories of the books she loved to read as a child. She has received numerous awards for her art and has shown her work in galleries in Los Angeles and London. Carolyn is living her dream (occasionally with a bunny roommate), sharing her love of art with her students, illustrating picture books and exploring writing and illustrating her own books. Visit her website at www.carolynle.com. 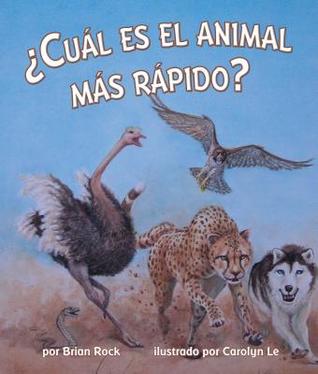 Email ThisBlogThis!Share to TwitterShare to FacebookShare to Pinterest
Labels: Books in Spanish, Brian Rock, Carolyn Le, Which Animal Is Fastest