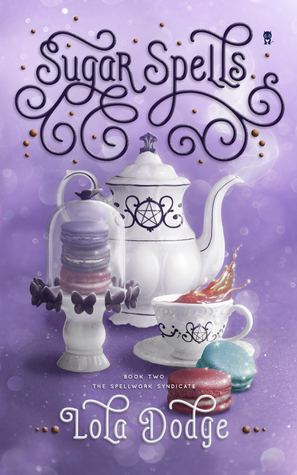 
For fans of Hex Hall, The Magicians, Practical Magic, and Food Wars!
After her run-in with a jealous warlock, apprentice baker Anise Wise can’t wait to get back the kitchen where she belongs. But thanks to her brush with death, the land of the living isn’t all cupcakes and marshmallows.
Anise’s magical mojo is way out of whack and her evolving powers are stirring up trouble. As the town buzzes with news that Anise can bake deathly spells, unsavory characters start lining up for a taste. They’ll stop at nothing for the chance to use Anise and her witchcraft to further their own plots.
She plans to hole up researching magic recipes until the attention dies down, but then she discovers the horrifying terms of her bodyguard’s contract. Wynn has saved her life so many times, she can’t leave him trapped. But doing the right thing will mean risking death or worse—being cast out of her dream job.
For this witch, justice might not be as sweet as advertised.


This is a delicious mixture of sweet magic, some dark creatures, and spicy adventure.

Anise has survived the adventure of the first book...a book I truly enjoyed...and now, finds herself at odds with her own magic. Thanks to her brush with death, death magic has intertwined with her own cheerful sparks. It makes for deadly baking, which really is killing her mood. Her necromancy friends are doing their best to help out, but it's slow. When she discovers a way she can still bake even with death magic seeping in, it appears that more than one problem might be solved. But nothing is as easy as it seems.

This is not a deep book but simply an enjoyable read with lots of sugary treats, magic, paranormal creatures, a very light dust of romance-ish, and tons of fun. In other words, a great read to simply escape reality.

Anise struggles with her magic, and her frustration comes across natural and very understandable. The attempts of her friends to help her is inspirational, and it's refreshing to see that these witches definitely have their borders on what they can do. There's a nice community feel as they stand together, even when it's not enough. The scenes carry danger, but also a bit of humor to even things out. It's a lovely mix.

Imagination flows freely in these pages, especially in the way of magical creatures. While Anise and her magical problems remain serious, the author has added a bit of childish wonder on the side. I enjoyed reading about the fantastical creatures and Anise's interactions as much as the more serious and action filled scenes.

Anise does have a tough adversary especially toward the end, and action scenes keep the suspense high. Some moments are more of a surprise than others, but there's enough of a unexpected twist to keep the tension flowing. The ending scene hit a little sudden, but then, it fits the tale and promises more to come. I'm looking forward to see what Anise will face next.

Email ThisBlogThis!Share to TwitterShare to FacebookShare to Pinterest
Labels: Lola Dodge, Sugar Spells, The Spellwork Syndicate, YA Fantasy, YA Paranormal