Review: The Harbinger by Candace Wondrak 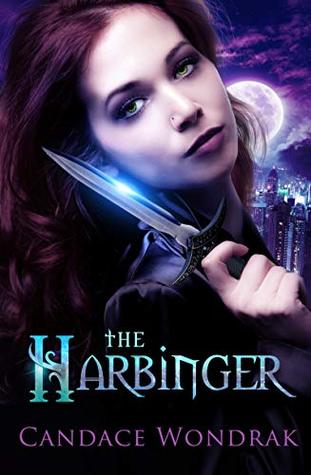 The rules of the Second, a list by Faith Blackwell.
One: technology doesn’t work. The Second doesn’t need electricity when it has magic. Two: don’t trust anyone. The Second’s races—the Elven, the Malus, the Ulen and the Dracon—are way too pretty to trust. Three: when someone tells you you’re the new Harbinger, believe them. Bad things happen if you don’t.
Back in the sixties, the last Harbinger permanently opened the gateways between Earth and the Second. Humanity grew accordingly. Faith is in her fifth year at the Academy, with her sight set on joining the Division, the branch of government that enforces what most law enforcement can’t, like smuggling goods between worlds. Following her mother’s footsteps has always been the plan.
Of course, she doesn’t want to follow them to a T. Her mother had awful luck with men, as did her grandma. Faith wouldn’t mind finding out what’s so special about a man that it has her quirky grandma swearing at them constantly. A field trip to the Second is just what she needs.
Being the first female Harbinger in the Second’s history and having to face down the realm’s most dangerous Dracon, also known as the ridiculously-named Dread King? Not what she needs.
Faith isn’t a hero. That sort of responsibility is not what she wants. The perks that come with it—like a sexy but infuriating Elf, a flirty Malus, and a quiet and pensive Ulen—well, maybe for them she’ll make an exception to her grandma’s no-man rule.
Maybe she’ll have them all.
The Harbinger is the first in a slow-burn, reverse harem fantasy series. Expect eventual hot and steamy scenes, coupled with the Chosen One trope, and a heroine who will reluctantly try to save a world that isn’t hers.

Set in a high fantasy world, this is a fast-paced story with much more than just romance.

Faith is a bit of a trouble-maker. As a pretty successful student at the Academy, she's on the right track to achieving her dreams of joining the Division one day and helping to keep smugglers at bay. But she's not exactly patient and oversteps the rules more often than she should, especially since her mother holds a very high position at the Academy. A field trip to another world, the Second, is supposed to help broaden her and her classmates understanding of the other realm, but instead, she finds herself caught up in a battle and possibly a war.

This is advertised as a slow burning reverse harem, and it is exactly that. Faith does have a potential love interest in this first book, but the relationship remains in a solid 'potential' area, keeping the romance at a very slow burner pace. I appreciated that. Faith isn't in this for romance. She isn't even really interested in becoming a hero or anything like that either. She has her goals already set and that is as a smuggler-snatcher. So when she suddenly finds herself and her friends victim to an attach and abduction, which ends with her being dibbed as the Harbinger, a type of re-generating savior to the elfs and other creatures of the Second, she's got enough on her hands to contend with.

Faith has an irritating personality, and that did turn me off on her quite a bit. She's snarky, arrogant, stupid and simply loud-mouthed. And she doesn't have the talent or extreme abilities to have the right to act better than anybody else. She's not at home in her own skin, and acts out. And this makes her hard to like. But she grew on my a little as the book progressed. At the end, she still isn't exactly wonderful as far as characters go, but there is a tiny bit of improvement. If this carries through the entire series, the character arc will be worth it.

Friends of epic fantasy are going to feel more at home than fans of paranormal or more urban fantasy tales. The world of the elves is rich and holds the high fantasy feel—something I loved. It snuggled a little strangely with Faith and her attitude, but in general, it makes for an intriguing mix...one high fantasy friends will appreciate.

And back to the romance—this first love interest, which is centered on in the first book, is definitely a building relationship and has absolutely none of the love-at-first-sight. There is a lot of trust to be built. And thanks to Faith's over-bearing personality, the 'sparky' scenes hit with awkwardness. It's not clear why the elf is drawn to her a little bit (because it isn't coming across as a tidal wave either). Yet, this odd romance fits the story and characters' quirky attributes better than a smoother romance would.

As to the harem, the last chapters finally give glimpses at the men it might include and hints at a direction the adventure could be going. But there are so many possibilities open and huge paths to be traveled before a real harem is underway, that it's hard to say exactly what adventures still await Faith. In any case, I'm curious to see what happens next and wonder if the next book will have me rooting for Faith more or not.