Here's a wonderful series for all of those adventurers out there, who would love nothing more than to experience the wild for themselves and head into the world of survival under even harsh circumstances. I'm starting out with the second book in the series because it was just released into the world...and all new books deserve the spotlight.
This is a series and should be read as such since the characters and events of book one lead to those in book two. 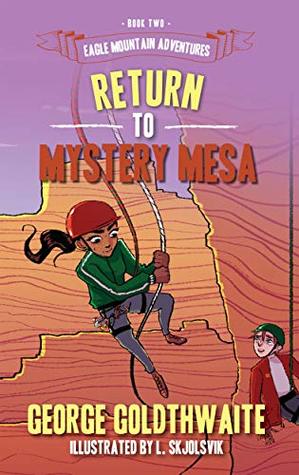 
Thrust into the spotlight following their plane crash and discovery of ancient artifacts, Josh and Alex are enlisted to help a local archaeology professor locate and protect the site. Unfortunately, Dr. Maggie and her team are not the only ones interested; a team of thieves threatens the project – and the lives of the entire crew. As the danger escalates, the pair need help from Mickey, Moose, and a mysterious stranger to save them as they Return to Mystery Mesa.

Adventure runs high in this fast-paced novel, while dribbling in exciting facts from archaeology surrounding mesas and the people who once inhabited them.

Josh and Alex find themselves in the spotlight after surviving the plane crash, especially when a college professor sees the ancient artifacts and pictures they brought back with them. After careful planning, the professor, her crew, and Josh and Alex head back to the mesa to discover what other secrets the ruins in the cliffs might hold. But the professor isn't the only one interested in the artifacts. Soon, Josh and Alex find themselves at the center of a very dangerous race, one that might cost them their lives.

This book drops in where the last one left off and heads full speed into the next adventure. The opening chapters allow a little bit of settle time as the professor makes her plans, but thanks to the criminal activities from others always hanging on the border, there's never a dull moment. The tension and suspense remains high as Josh and Alex return to the mesa, this time accompanied by experts and gear. But that doesn't make things safer. And it's this exciting twist which makes the second book just as intriguing as the first while still attacking entirely new dangers.

While book one incorporated survival methods, this edition hits more on history and archaeology. The author allows the knowledge to seep in along with the action. It never comes across as preachy and actually makes the story that much more interesting.

Again, Josh and Alex need to go beyond their comfort zones. Both run into moments where they are uncertain and afraid, keeping them easy to relate to. While they have moments of heroism, never does it go beyond reality. This is inspiring and helps readers see that they too can accomplish amazing things if they put their minds to it.

I enjoyed this book more than the first. There are two fatal accidents in this book, something parents might keep in mind when handing it to more sensitive readers. But all in all, I highly recommend this read. 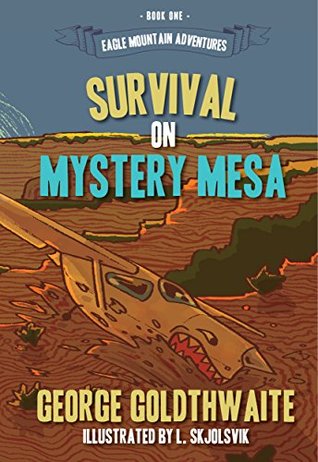 A weekend ends with a doomed plane crash in the wilds of New Mexico. The pilot is injured, leaving thirteen-year-old Alex, and her two friends, Josh and Mickey, to find food, water, shelter, and a way home. Severe weather is closing in, wild animals are on the prowl, and a mysterious stranger lurks in the shadows as the kids fight for Survival on Mystery Mesa.

Alex, Josh and Mickey are on a weekend trip with her father. When bad weather brings the plane down in the middle of nowhere in northern New Mexico and Alex's father is severely injured, the three must find a way to survive until help arrives. Not only must they search for food and water, but severe weather demands they find shelter under extreme conditions. But that's not their problem. The wildlife isn't all bunnies and squirrels. Soon, the three find themselves fighting for their very lives.

It's been awhile since I've read a book which tackles basic survival methods in the wilderness and packs them into an exciting story. Alex, Josh and Mickey come across as fairly average kids. Their interactions, thoughts and fears fit right into the age group, and make them easy to identify with. As the story moves along, they show, however, that they are not to be underestimated.

The author allows real life survival methods to trickle in with these characters as they use the airplane battery to start a fire, build a splint, set snares for rabbits, discover water and other such things. The story molds masterfully around the useful information and doesn't shy away from the facts. Even the basics on how to skin and gut a rabbit are offered—something not all readers will appreciate, but others will enjoy the honesty and understand the survival tactic. While the story educates and entertains, the amount of information the kids know for their age steers away from reality. Still, it's a wonderful mix and well done.

The first chapters are a little slow and allow time for the reader to get to know the characters, but after this start-up, once the action gets going, it doesn't stop. The tension holds the entire way through, and is especially well done in moments of peeked danger. There's enough humor built in to keep it from growing to serious, and there's even a mystery, which isn't really solved by the end.

This is a great beginning to a fun and educational series.

The hungry mountain lion rested on a high ledge farther down the canyon. Another hundred yards and the smaller animal that walked on two legs would pass beneath its perch. The male puma had seen these creatures the evening before when they fell from the sky and he stalked them after dark. He would have eaten one last night, but was turned away by the fire. Others had wandered past just minutes before, but they were larger, and with two of them, the stalk would be both difficult and dangerous. This smaller one, traveling alone, would be easy. The wild cat could not hate, could not show mercy.
It looked at Mickey as nothing more than a next meal, feeling no more concern for him than a person would for a hot dog.

George Goldthwaite grew up in Fort Worth, Texas, where he spent virtually every weekend at nearby Eagle Mountain Lake developing a love for all things nautical. In pursuit of a childhood dream of a life on the water, he attended the United States Naval Academy in Annapolis, Maryland. Life soon took him to the sky as a Navy pilot, flight instructor, and finally as a pilot for a major commercial airline.
Along the way, he developed a love for the great outdoors, and a quest for the ability to survive with whatever materials available. After twenty-five years of flying passengers across the nation's skies, George retired and now pursues his passion for writing books.
George is a proud member and former First Vice President of the DFW Writers' Workshop, where he is also actively involved in their nationally acclaimed annual conference. He is the father of three sons, all pilots. George resides not far from his hometown of Fort Worth with his wife Pam, and golden retriever Goose. They live a Texas-style version of the old West, maintaining a rural home in north Texas and a hunting ranch in Mills County.
George believes that adults don't give kids the credit they deserve. Eagle Mountain Adventure series is intended to not only interest kids in outdoor activities, but also encourage them to work together and use their heads to find ways to get through difficulties. He wants young readers to find role models in characters that are unashamedly smart, respectful and resourceful.