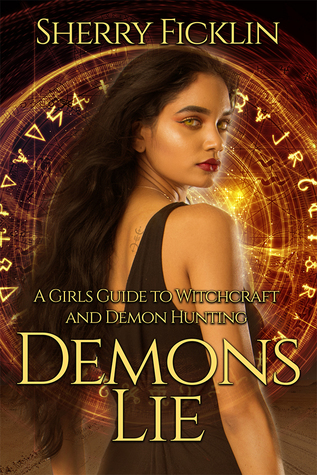 Orphaned by an unspeakable evil, Aria Dupree is the last of her line. A powerful witch tasked with guarding the boundaries between our world and the world of demons who prey on humankind, Aria has gone rogue. Now she’s out to find and destroy every single gateway into our world and kill every demon that she can find — including the one who murdered her mother.

But, as it turns out, hunting is the easy part; it’s graduating high school that might kill her. Red Prairie Texas isn’t just another stop on her demon hunting world tour and an unlikely alliance might be exactly what she needs to keep from becoming a slave to the very darkness she’s been fighting against.

Because the devil is coming down to Texas — and only Aria can keep all hell from breaking loose.

Although a teen, this witch is a lone hunter against dark forces, and when high school life hits, it adds an entirely new dimension to her adventure.Orphaned and with no relatives left, Aria is a powerful witch on a mission to close all the gates to the demons' realm and revenge her mother's death. When she enters the small town, the next one on her list thanks to increased demon activity, she takes on the disguise as a high school student in hopes it will get her closer to the demon. And she finds what she's looking for. Maybe. A couple of her classmates are sending out surprising vibes, and they don't fit in with her usual experience of demon hunting. It's these students who are about to change her life.The first chapter grabs right away, and the tension doesn't let up until the last page. Aria is a strong fighter with some experience. She is determined, centered and a no-nonsense kind of girl. She has to be. But she's still a teen, and this comes through when she enrolls into school. High school drama slides right in, making it a perfect YA read. At first, Aria is only concerned with her mission, but soon allows herself to be swept into the teenage life...to a certain degree. It's an interesting twist which lures in and makes this a bit more original than some YA reads.There are demons and fight scenes as well. When these appear, they are dark, full of action and hold suspense. However, the demons don't always hold the center seat as Aria's relationships with her new friend, Maddie and Ben, are, in many ways, more important in the plot. Part of me would have loved to have seen more demon action and intrigue (they weren't always as present as I would have thought), but on the same hand, this book gave the development necessary to base the rest of the series. Maddie and Ben have stories and mysteries of their own, and this first book gets the trio set for the upcoming adventures.Romance is also found in these pages, a sweet, high school one. Although sparks fly right away, they aren't necessarily the romantic kind immediately. The romance does hit with the usual teen quickness, but there is enough hesitation and other aspects woven in to keep it in line with the rest of the story. In other words, it works nicely.This is a exciting read for demon fighting fans and a great first book for a series. It will be interesting to see what happens to the trio next, and whether or not this story stays YA since they have now graduated high school and are heading out into the world on their own to get those pesky demons.
on October 22, 2018

Email ThisBlogThis!Share to TwitterShare to FacebookShare to Pinterest
Labels: A Girls Guide to Witchcraft and Demon Hunting, Demons Lie, Sherry Ficklin, YA Paranormal