Happy Book Birthday: Grampa, Will You Tell Me A Story by Brian Crane's "Pickles" and Dianne Young! 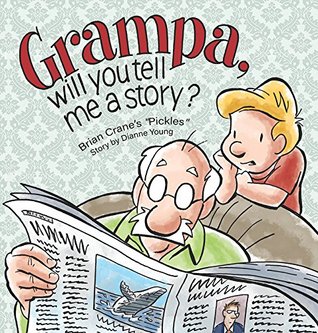 GRAMPA, WILL YOU TELL ME A STORY?
by Brian Crane's "Pickles"
Story by Dianne Young
Baobab Press
Graphic Fiction
33 pages
ages 4 to 8


For over twenty-five years, Crane’s comic strip, Pickles, has been delighting readers around the world, and for the first time Brian Crane brings his beloved characters into a book intended specifically for children.  Crane’s crotchety but endearing senior, Earl Pickles, can be humorous and often touching, and when his precocious grandson, Nelson, asks his Grampa to tell him a story, Earl’s imagination takes over. The two embark on a journey filled with whales, hot dogs, and an intense but lovable ostrich in a raincoat. Written by award-winning Canadian children’s author Dianne Young, this quirky tale is sure to entertain children, fans of the strip, and anybody who enjoys a rollicking adventure.

What a wonderfully silly and yet clever read!

Nelson asks his grandfather to tell him a tale, something the grandpa is happy to do. The story starts out and soon takes an odd twist as Nelson's answers to his grandfathers questions are twisted around into something he didn't mean at all. Either his grandfather isn't listening or might be deaf, but the result is an increasingly quirky story, where little makes sense, frustrations grow and yet, there's heart in all of the nonsense.

Anyone who has read Brian Crane's "Pickles" comics will feel immediately at home, and those who haven't, are in for a treat. This isn't a book to be read with seriousness or logical thoughts, but lets imagination in all of its ridiculous soar. Humpback whales in a splash pool are only the beginning to a story which builds, and as it does, makes less and less sense. And it is marvelous.

Nelson's frustrations are evident as he tries to help with the story, but every question he answers or attempt he makes to add something that nears logic is quickly warped around by his grandfather. It's a sneaky glimpse at the distance which can sometimes form between the generations, and yet, also shows the bridge, which brings to closer understanding.

The characters and text flow together seamlessly and allow the tale to take flight. It will keep kids bound to the book, wanting to glance through on their own time and again. But then, parents who are willing to let go and simply enjoy the silliness will want to revisit the book often too. 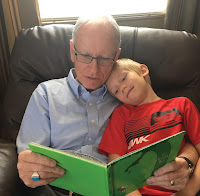 Brian Crane’s, Pickles, is syndicated in over 900 newspapers worldwide. He has been nominated three times for the Outstanding Cartoonist of the Year award by the National Cartoonists Society and won in 2013. Pickles has been nominated twice as Best Comic Strip, a prestigious award it won in 2001. Crane lives in Sparks, Nevada, with his wife and family, which consists of seven children and eight grandchildren. 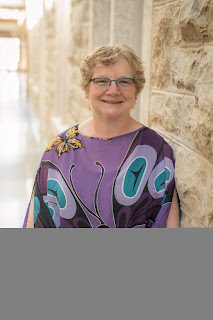 Dianne Young is an educational assistant in an elementary school, a mother, a wife, a writer, and a yodeler. She was born and raised in Saskatchewan, and she has been writing for children for over twenty years. Her previous publications include The Abaleda Voluntary Firehouse Band, Dear Flyary, which won the 2014 Saskatchewan Book Award for Children’s Literature.

Email ThisBlogThis!Share to TwitterShare to FacebookShare to Pinterest
Labels: Brian Crane's Pickles, Dianne Young, Grampa Will You Tell Me A Story