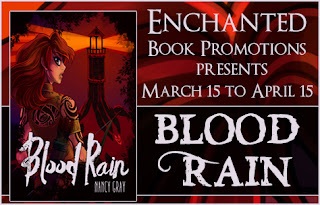 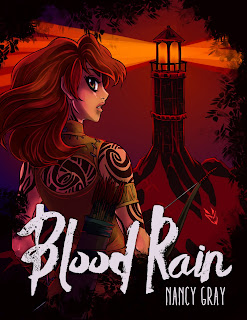 
The night the blood rains from the sky, Mind of Mercy’s world changes. The savage Blood Wings, bestial creatures that feed on the blood of Mercy’s people, attack her treetop village in frenzy.


Mercy’s father, the chieftain, tasks her to leave during the fight and find the source of the storm. The journey takes Mercy across the continent of Lacern where she must make allies, even from some of the enemies of her people, to survive. The search forces her to get help from the least likely of sources, one of the very Blood Wings that attacked her.

During her journey, Mercy and her companions discover lies that are widely accepted as truths, secrets hidden by the beast men, and a power buried deep inside of Mercy herself. Magic is resurfacing in the world and the blood rain is only the beginning. A hidden power is pulling the strings to cause a continent wide war that could result in the destruction of humans and beast men alike.


Blood Addicts in the Blood Wing Caverns
(While waiting on Erebus, one of the Blood Wings that has allied himself to Mercy to search for those responsible for the blood rain, Mercy and her friend Mirilee are attacked by a group of blood addicts. When things are looking desperate, Erebus returns and uses magic, a force that hasn’t been seen in the world in over a hundred years, to protect her.)
Black tendrils of shadow reached up and grabbed Marrow’s arms and legs. They yanked him down, knocking Mercy over, but his hands and face were thankfully wrenched away from her skin. She could hear the horrible ripping and snapping sounds and knew what the shadows were doing to her captor. They were quartering him. She tried to look away, but saw the outline of his limbs parting from his body and felt the warm spray of blood wash over her.
Mercy turned and looked at Erebus in revulsion. A look of hurt understanding ran across his face. He began to say something, but before he could speak he began to scream in physical pain, holding his head and stumbling around. Blood was pouring from his ears, eyes, nose, and mouth. His body and face began to change.
His violet glowing eyes changed into the color of a clear sky blue. His fur receded along with his leathery wings, and his fangs and muzzle shrank down until they were a human mouth and nose. The features fit Erebus just as much as those in his beast form, if not more. His body shuttered one last time, as though shaking off every last semblance of his bestial nature. He looked at his hands with a shocked expression and then fell unconscious.
Cruor caught Erebus before he could hit the floor and snapped, “You just had to use your abilities in front of them. In some ways, Marrow might’ve been right.”
Mercy didn’t waste the distraction of her enemies. She drew her bow and readied an arrow just in time. Grimes was limping towards her, clearly taking advantage of the fact Erebus was incapacitated. She released the arrow and it hit Grimes squarely in the chest. He clutched at the wound and fell down, rasping for breath. His brother Dread rushed forward. Mercy knew she wouldn’t have time to nock the second arrow, so she braced herself for the impact of his body - only to find he abruptly stopped with a stunned look on his face and then fell forward. Mirilee had hit him squarely in the back with one of her throwing daggers. He toppled over, dead.
Mercy saw Brine’s eyes began to roll back in her head. Blood was everywhere in the room, and it seemed that the Blood Wing’s own blood made them frenzy as easily as that of the tribal people. She howled and rushed at the closest person in the room, which happened to be Mirilee. Before Mercy could shoot Brine with an arrow, Cruor threw a long ornate spear which hit Brine directly in the neck. She died instantly.


Cruor said sternly, “You need to go, now. Go back out the way you came in and take Erebus with you. The guards should still be asleep. I’ll meet you where Erebus left the mounts.” 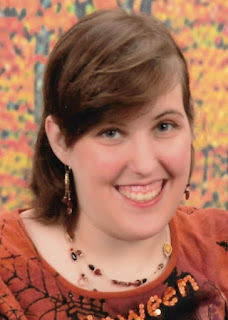 Nancy Gray lives in West Columbia, SC, with her husband, two daughters, and two crazy cats. She attended college at the University of South Carolina and attained a BA in Media Arts with a cognate in English. Her original career was as a graphic designer but writing is her calling. Her favorite genres to write are horror, fantasy (particularly young adult), steampunk, cyberpunk, urban fantasy, and occasionally light science fiction (space opera).  Many of her short stories and novels also blur the lines of genre fiction.  Nancy is an avid reader and also enjoys drawing, video games, and table top role playing games. She also enjoys anime and manga.