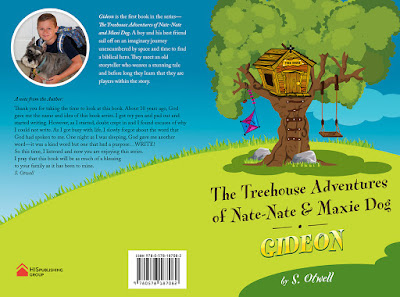 Thank you for taking the time to look at this book. About 10 years ago, God gave me the name and idea of this book series. I got my pen and pad out and started writing. However, as I started, doubt crept in and I found excuses of why I could not write. As I got busy with life, I slowly forgot about the word that God had spoken to me. One night as I was sleeping, God gave me another word--it was a kind word but one that had a purpose...WRITE! So this time, I listened and now you are enjoying this series. I pray that this book will be as much of a blessing to your family as it has been to mine.


With a bit of modern boy/dog adventure, this book takes a jump into Biblical past and brings the well-known characters from that time to life.Nate-Nate and Maxie Dog climb the treehouse, drop the pirate sail, and take off to visit Gideon from the Old Testament. They expect to find quite the warrior, but reality presents something totally different.The whole thing starts out with a tree house, but not just any tree house. This one can change into a pirate ship--the perfect way to set off into adventure. This alone will inspire kids to hit imaginative trips of their own. But this trip has more in mind than just fun. The religious goal rings loud and clear, and heads into Gideon. The image Nate-Nate has of Gideon fits what many kids might see a successful warrior as, and the discovery that reality is often different not only is eye-opening but gives a gentle push to the rest of the story, where God's plan unfolds. Once the story gets going, it reminds of the thin paperbacks from Sunday School and holds a similar flow. Much of the beginning of Gideon's tale is told through a narrator, which Nate-Nate listens to. It's engaging but causes an unnecessary distance. When Nate-Nate and Maxie do meet Gideon, there's more interaction. Still, the story unfolds as being told.The amount of text and vocabulary makes this a nice read-aloud for kids four and up or as a read alone for kids ages 7+. There are bright illustrations the entire way through.Summed up, this is a nice tale for kids, which revisits Gideon and allows young readers to learn more about him and how he trusted God.