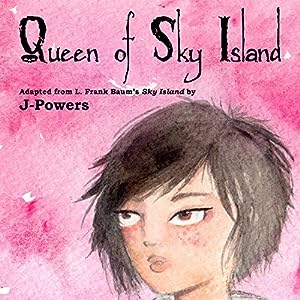 Queen of Sky Island is a coming-of-age story charged with fantasy, heroic adventure, and vividly imagined new worlds. It is a 21st century adaptation of a story by L. Frank Baum, the creator of The Wonderful Wizard of Oz.
Queen of Sky Island reveals a young girl, Tara, who, in her determined search for her military father, becomes trapped on an actual island in the sky where she leads one otherworldly army against another.
Tara's faithful companions on this perilous adventure are Bobo, a brave young boy who possesses a flying umbrella; and Sgt. Rik, a resourceful disabled veteran who looks after Tara and her mother at their seacliff cottage on earth. Through miscommunication, Tara and her companions arrive at Sky Island, a bizarre land divided between wildly different pink and blue territories. They are unfairly taken prisoner by the Boolooroo, the selfish and mean-spirited leader of the Blue people. Facing a horrible punishment known as patching, Tara and her companions escape and run for a thick fog bank that separates the two territories. With help from an unusual creature, they cross through the dense fog, and they are taken to the queen of the Pinkies.
After surviving a near fatal test in this new realm, Tara shows what she is made of and rises to lead the Pinkies against the Blues in an attempt to defeat the Boolooroo.

Packed full of imagination, this audio book leads into a great adventure and a wondrous world.

Tara wants nothing more than to have her father return from his military mission, especially when it's rumored that he's trapped on Sky Island. When a boy appears with his fly umbrella and offers to take her to find her father, they discover that Sky Island is really an island in the sky. The ruler, Boolooroo, is as nasty as can be. . .and he has no intention to ever let them leave again.

This is a retelling of a story by L. Frank Baum, and it's important to keep that in mind when starting to listen to this. Tara comes across pretty spiteful, and her mean reactions to the birds and Bobo don't exactly make her a character to sympathize with. But she grows--not only on the reader but as a character--and does warm up until she's a heroine to cheer for. Especially Bobo and her uncle add a lot to the tale and form a wonderful trio.

The descriptions are just enough, never too much and bring the world to life. The fantastic world opens up, and it's easy to get lost in the wonders of the strange island. Especially in the beginning, it's clear that even Tara doesn't come from a normal situation. . .the sea gulls might be normal, but the way her and her uncle just accept Bobo and his flying umbrella without too much thought make it clear that this is a colorful, fantasy world which in many ways reflects our own reality, but isn't quite the same either.

There isn't much time spent on details, but this story takes a fast paced dive into the adventure and holds pace the entire way through. The narrator has a sometimes wispy voice, which gives a great feel to certain characters and keep the dreamy like fantasy alive.

Summed up, this is a lovely trip into a fantastical adventure, which will inspire young listeners and chase them into a wonderful dream world. 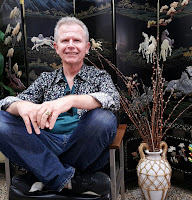 John Powers (a.k.a. J-Powers) is the author of Queen of Sky Island. He lives in the harbor area of Los Angeles with his wife and three millennial stepchildren.

All about the narrator. . .

Ramona Master (narrator) is a theatrically trained actor with more than a decade of professional performing experience. She has performed on stages big and small in Chicago, Massachusetts, London, New York, and even a year-long national tour. She also teaches theater to teenagers and children at the performing arts center where her son currently takes ballet.
on April 17, 2017