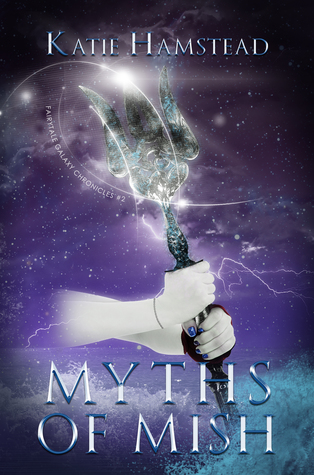 Hansel and Gretel Herrscher survived the witch in the woods, but the experience has made Hansel paranoid for the past ten years. He sees dark magic at every turn. When Gretel has a marriage arranged to a much older man, and Hansel discovers he's about to be sent halfway across the galaxy, he knows something sinister is afoot.
Wilhelmine Nordon has plenty of experience with Hansel's quirkier side. So when she catches him and Gretel running away in the middle of the night, she follows to keep them from getting killed. The siblings have never left the capital of Mish on their own, so they need a babysitter. Except when she's discovered, Hansel gives her his usual cold shoulder, and Gretel secretly begs her to take them back.
The problem is, Hansel's paranoia turns out to be well founded, and they're all being hunted.


Flying ships and magical planets--Hansel and Gretel dive into a galactic tale which brings the shadows and thrills of the original fairy tale to life in a whole new way.

Gretel's arranged marriage has been announced, and Hansel discovers that he's about to be 'pushed off' to one of the top schools. Some might see these as a blessing, but Hansel's convinced it's all part of his step-mother's evil plot to get rid of the two. Again. Hansel does the only thing he can--takes Gretel and runs.

This is the second book in the science fiction series, and I did not read the first one. Still, I had no trouble disappearing into these pages. In other words, it's a definite stand alone.

Although this falls into the science fiction category, there's a lovely mixture of fairy tale and fantasy tossed in. It takes places on an alien planet, but it's not hard core and is easy to get lost in the magical world. Descriptions are kept to a minimum, which, at times, was a little disappointing. But then, this tale is all about adventure and a fast-paced plot. The first pages start out with a bang, illustrating the tempo which holds on the whole way through. The characters are well enough explored to get to know them fairly well, but depth isn't key in this book. It's a set sail and enjoy the high-wave ride sort of read.

Hansel and Gretel catch the eye from the beginning on and are true siblings to the very end. Gretel has the exact same innocence and dreaminess that is to be expected from her character in the original tale. Hansel, on the other hand, is prickly. Where Gretel trusts everyone, he trusts no one. He's harsh, rude, commanding and doesn't set of the slightest warm-fuzzy feeling. Although this changes through the book, it takes a bit and, at times, it's hard not to give him a big, fat raspberry. But by the end, he redeems himself completely.

Minna is the new addition, and what an add on she is! Spunk, elegance, cleverness and finesse surround her like a pleasant cloud. She adds just the right amount of zest to Hansel and Gretel, and rounds off the story in so many ways.

There's adventure, action, danger, witches, mystery, a bit of steampunk and romance. It's easy to get lost in the story. The sheer excitement of joining the trio as they search out the mystical island to get to the bottom of Hansel's paranoia makes it worth the read, and I can't wait to see which fairy tale joins this series next.