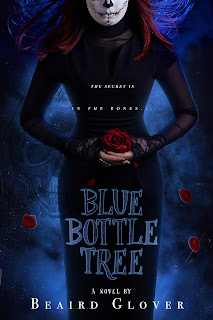 There’s no such thing as Voodoo. At least, that’s what most of the Baptists in Bellin tell themselves. But Seven LaVey knows better. In a small rural town just outside of Nashville, Voodoo conjures and curses simmer and seethe under the noses of the many who will never know. Seventeen-year-old Seven romanticizes about the meaning of life while held captive as a zombie under the shell of a kiddie pool. He's counting on the strength - and maybe even love - of a certain redheaded clarinet player to save him. But will she?Filled with betrayal and revenge, two families struggle with a curse that stretches back to Queen of the Voodoos Marie Laveau in this contemporary Southern Gothic adventure. Prepare for a wildly original twist on the paranormal.

Beaird Glover grew up on a farm in rural Tennessee. He graduated from The Evergreen State
College of Olympia, Washington, with a Bachelor of Arts degree in creative writing. He
then moved to Southern California and wrote Secret Ciphers of the 1876 Presidential
Election (Aegean Park Press). He has traveled extensively and lived in eleven of the
United Sates, and Taipei and Buenos Aires. His poems have been published in the
New York Quarterly and his chapbook of poetry was selected by the Austin Chronicle
as one of the Top 10 Best of 1994. More recently, he acquired a Bachelor of Science
degree from Long Island University in Brooklyn and has worked as a physician assistant.
Beaird now lives in New Orleans with his wife Kim and their cats.
PRE-ORDER LINKS:
ITUNES: https://itunes.apple.com/us/book/id1226729059
KOBO: https://www.kobo.com/us/en/ebook/blue-bottle-tree
B&N: http://www.barnesandnoble.com/w/blue-bottle-tree-beaird-glover/1126236367;jsessionid=A2D83750EA160ADFC1D4A2A871A0121D.prodny_store02-atgap04?ean=2940154346358