Review: Jorie and the Gold Key by A. H. Richardson

Jorie and the Magic Stones is the first book in a new chapter book series, by A. H. Richardson, that follows one heroic nine-year-old girl on an unforgettable adventure. Children everywhere are loving this adventurous tale of Jorie and Rufus, two orphans from very different walks of life, who meet by chance and discover a mystic book about dragons, that soon leads them on a quest through a magical world unlike anything either of them have ever experienced… 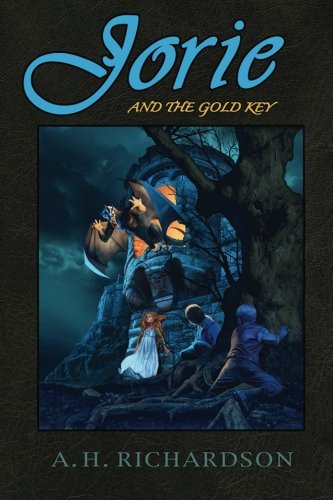 When Marjorie went to live with her frosty maiden aunt, she couldn’t imagine the adventures she would have with dragons — good and bad — and all the strange creatures that live in a mysterious land beneath the Tarn. The spunky 9-year-old redhead forges an unlikely friendship with an insecure young boy named Rufus who lives with his crusty grandfather next door. When Jorie — for that is what she prefers to be called — finds a dusty ancient book about dragons, she learns four strange words that will send the two of them into a mysterious land beneath the Tarn, riddled with enchantment and danger. Hungry for adventure, the children take the plunge, quite literally, and find themselves in the magic land of Cabrynthius.

Upon meeting the good dragon, the Great Grootmonya, Jorie and Rufus are given a quest to find the three Stones of Maalog — stones of enormous power — and return them to their rightful place in Cabrynthius. Their mission is neither easy nor safe, and is peppered with perils in the form of the evil black half-dragon who rules the shadowy side of the land. They have to deal with a wicked and greedy professor, the tragic daughter of the bad dragon, caves of fire, rocky mountainous climbs, and a deadly poisonous butterfly.

Jorie must rely on her wits and courage to win the day? Can she do this? Can she find all three Stones? Can she save Rufus when disaster befalls him? Can she emerge victorious? She and Rufus have some hair-raising challenges, in which they learn valuable lessons about loyalty, bravery, and friendship.

Packed with adventure and imagination, this chapter book takes off into a rich world where friendship, loyalty and trust are key.

This is a wonderful adventure, which stretches the imagination and then some. The chapters are easy to read and flow seamlessly as Jorie and her friends head from one tense situation into the next. But this isn't only about dangerous scenes; there's a lovely amount of humor dabbled in, which makes this simply a joy to read.

Friendship is key in this book, especially when one of the three isn't exactly wanted at first. The message of getting along and learning to trust others shines through, as Nigel learns to work alongside Jorie and Rufus. Friendships can form even when no one believes they ever could.

The characters in this book are simply fun. Each has their very own personality, and each has a bit of bite which rounds off great with their hearts of gold. It's fun to root for them as they enter the colorful world, one where kids' imaginations can really take flight.

Summed up, this is a fun adventure with magic, fantasy and kids which are easy to relate to and a ton of fun.

“An easy to read chapter book that can be enjoyed of children of all ages, Jorie and the Magic Stones succeeds at creating an extraordinary world full of memorable characters and dangerous villains. In Jorie and Rufus, the narrative follows the blossoming of a friendship, while exploring the strengths of each of these two main protagonists. Weaving in morales about important ideals like loyalty, bravery, and what it means to be a good friend, the story shows younger readers how important it is to do the right thing, no matter the costs. With rich descriptions, realistic dialogue, and settings you feel as if you are truly immersed within, this is the start to a promising new fantasy series...” - Red City Review

“Jorie is inquisitive, brave, and wise beyond her years, and yet still a child at heart… she is everything a heroine should be... All this, coupled with a one of a kind plot and an exceptional setting, brought to life an amazing fantasy tale.” - 5 Stars, Readers’ Favorite

“If ever there was a children's book that was meant for children of all ages, this would be that book. From page 1, you instantly fall in love with the Jorie, the heroine. The storyline flows wonderfully. It makes you feel as if you're there with the characters feeling the excitement, fears, and joy that they feel as they go on an incredible adventure.” - 5 Stars, Matthew and Alicia Lucy

“I absolutely love this story! It just carried me away and I couldn't put the book down!! I loved all the different characters... The author did a wonderful job describing all of them and my imagination kept on going!” – 5 Stars, Amazon Review

A. H. Richardson was born in London England and is the daughter of famous pianist and composer Clive Richardson. She studied drama and acting at the London Academy of Music and Dramatic Art. She was an actress, a musician, a painter and sculptor, and now an Author.

She published her debut novel Jorie and the Magic Stones in December 2014. At the request of those who loved the first ‘Jorie’ story, Richardson has written a sequel titled Jorie and the Gold Key, and she is currently working on the third book in the series.

She is also the author of Murder in Little Shendon, a thriller murder mystery which takes place in a quaint little village in England after World War Two, and introduces two sleuths, Sir Victor Hazlitt and his sidekick,  Beresford Brandon, a noted Shakespearian actor. She has more ‘who-dun-its’ planned for this clever and interesting duo… watch for them!

A. H. Richardson lives happily in East Tennessee, her adopted state, and has three sons, three grandchildren, and two pugs. She speaks four languages and loves to do voiceovers. She plans on writing many more books and hopes to delight her readers further with her British twist, which all her books have.

To learn more, go to https://ahrichardson.com/