Review: Mind Over Bullies by D.K. Smith with Giveaway! 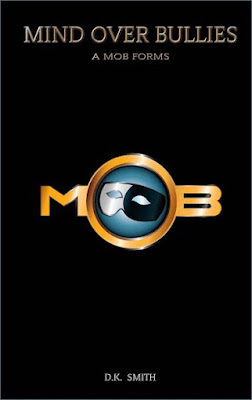 People that feel bullied just need to toughen up. That’s what Margo Rios used to think. Margo is pretty, popular and unsympathetic to just how intense bullying can get. As a counterfeiting plot sweeps through the city of Oak View however, life for Margo changes dramatically.


With the mystery unfolding, an unlikely group of heroes emerges. Bullied teens love them, the police hate them and bullies fear them. Together they will try to get to the bottom of the counterfeiting mystery while ingeniously teaching a few bullies a lesson or two along the way… that is, if the police don’t catch them first.


“Mind Over Bullies: A MOB Forms” follows the lives of several teens chronicling the emotional and psychological changes they experience as a result of their encounters with bullying. The lives of the characters play out while an elaborate counterfeiting mystery unfolds making for a fast paced, action-packed read.

The title of this book relays the main issue presented in the book: bullying. This is a topic which many kids/teens can relate too, but unlike many books which tackle this theme, MIND OVER BULLIES adds an interesting twist.

Firstly, I need to say that this book is for YA and not necessarily the younger side. Lots of issues are addressed which border on adult books--death, injury, forging money, drug pushing, and girls seducing men in night clubs. I don't recommend it for anyone under 15/16 years of age.

In many ways, this book reads a lot like a detective or crime story. The opening shows a pair of teens trying to purchase several hundred dollars worth of clothes with fake $100 bills. They're chased by a line of police cars and end up in a turned over vehicle with a police helicopter circling over head...a situation I really hard trouble swallowing. But since this is fiction and even more unbelievable things happen later on, I can accept that.

The author does a terrific job showing the ugly face of bullying. I especially enjoyed the way the main character, Margo, went from popular to a more 'outcast' role. These scenes really reeled in the problematic well. The bullying in general was very vivid and hit all sorts of different characters in various ways. The impact this had (or lack there of) on others in the high school was well done and gave a great view into the situation.  Of course, the teens could have handled this bullying situation much quicker and easier by simply informing the correct adults, but that wouldn't make a great story. The way Margo and her companions take on the bullies was inspirational and an expertly woven tale.

The other plot in this book deals with the mystery surrounding the forged bills. This added a nice douse of sleuth and tension as Margo goes from one situation to the next, interviewing or simply observing the world around her in her very own journalistic manner. Her easy access to police was a nice touch, and made the two very different plots come together seamlessly. This criminal side of things added a lot of depth and excitement, giving the entire bullying theme an exciting and interesting twist. I especially enjoyed the scenes in London since it added a whole new, unexpected dimension to the mystery.

The writing in this is well done and believable for the age group. The entire thing is broken down into short scenes, giving the story more of a screen play feel. I personally was taken back by this approach, but I'm sure others will find it a great and refreshing. Although this short and quick leap from one important scene to the next enables the story to cover a lot of ground fast (and with the complex plot, it has to do exactly this), I didn't feel as connected to the characters as I wanted to. Although I got a good feel for Margo, the other characters didn't always have enough depth to make me care. . .but with such a full cast, it'd be hard to get much emotion in.

This is definitely an action story, not leaving much room for descriptions. Only the most necessary information of the surroundings is given, not allowing any room for boredom or wordiness. There's a lot of mystery and enough tension to keep a reader hooked until the very last page. Definitely an interesting read.

A 38 year old native of Los Angeles, Mr. Smith began his writing career after getting news that he would soon become an uncle. Wanting to create stories and characters for his expected niece, he created the children’s book series “Sock n Boots Adventures.” The two characters (three year old Sock and five year old Boots) began to make names for themselves, generating downloads in countries around the world.
When asked about his motivation to tackle the subject of bullying in a 108,000 word novel Smith said, “One day I came across a story in the news about a young girl that jumped in front of a subway train after weeks of bullying. As I investigated further, I was shocked at the number of similar stories I encountered. Bullycide, the news was calling it. I thought, wow, what if these young people had been shown that the pain of bullying can be handled without hurting themselves or someone else.”
Ultimately it was thoughts of his now four nieces and three nephews dealing with bullying as they get older that weighed heavily on the decision for Smith to write the story about bullying. “I recognize that the characters and situations in the book may not represent every bullying situation and that realistically the book won’t change the world, but I do sincerely hope that it sends a subtle message about there being life after bullying. We’ll just have to see how the public receives it,” Smith said.
A lover of mystery and espionage stories, Smith is a fan of everything James Bond. A favorite scenario is to see a character in an impossible situation get out of it at the last second or have the odds against them and see he or she turn the tables. Acting on the love of espionage and mystery, Smith has a new novel in the works centering on a James Bond-type character of his own creation.
Connect with the author:     Website  ~  Facebook  ~  Twitter