Free Excerpt from The Hybrid by Venus Morales with Giveaway 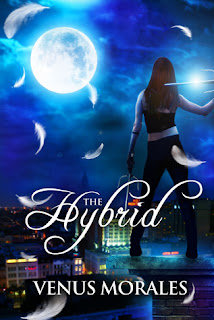 Ari is the daughter of Ares, the God of War. Half goddess and half Phoenician, she is raised by her father in secrecy until her 18th birthday, when he is forced to return to Olympus.

She chooses not follow her father, and decides to venture out into the mortal realm. There, Ari crosses paths with the archangel Julius, who bears a message from a seer. Ari must return to the Bayou to her late mother's coven to regain her family crown, she is soon fighting for more than just the crown; she is fighting for her life, and the inner darkness that's consuming her.

With 7 days to prepare for her trials and 7 days to fight for her life, Ari does the one thing she must do to survive; she forges herself into the weapon she was born to be.

He glared up at me with pure red raging eyes and he let out a battle cry. Striking back at me with his eternal flame, I was tossed back by his flames, only to regain my footing. I unleashed my flames as they both intertwined like two rabid dogs snarling and shoving back and forth. I could see the struggle on Cael’s face.
I continued to push and push, feeling my fire rise and rise, growing hungrier than ever. No longer red, orange, and blue, but now blue and orange. Everything I saw around me was now blood red. I no longer heard the voices of the crowd making ooh’s and ahh’s. I no longer heard Julius calling out to me or anyone else for that matter. I only felt the power surging within me, swirling around like a tsunami with turmoil.
I raised my arms out by my sides, letting every ounce of my fire burst out of me straight toward Cael like a freight train. It pounded down into him like boulders falling from the sky. Cael couldn’t resist the intensity of my fire as he retracted his eternal fire back within him. I let my flames bite into him, burning every ounce of him from head to toe, hearing him scream out in pain. I pulled back, feeling myself depleting. Fighting to stay fully engulfed, I walked over and stood over Cael’s badly incinerated body. I could see his body slowly mending back together. “Do you agree to my terms?” I asked firmly. He lay on the ground, breathing in shallow breaths glaring up at me with slitted eyes.
I turned and started to walk away, calling back my flames like a vacuum. I was prepared to be visibly naked before the entire coven, only to look down and see that I was not. I still wore my mother’s battle gear and boots.
Fireproof?
Famished by all the power I just used, I wanted nothing more than for this to be over. I was glad to finally end this. I looked up at Julius, who was not too far ahead smiling at me. I smiled back, exhausted. His face instantly changed to a fearful, shocked look, I could see his eyes averting to behind me. I could not hear him scream, but only saw his mouth moving— shouting out something.
I knew then it was now or never. I had a split second to react to what I knew was inevitable. What I should have done the minute I had the chance. I pulled the god killer blade free from my waist and ducked as I spun. A breeze passed over my head as he swung his arm out aiming straight for my head with his dagger. I arced my arm up with my blade and drove it straight into his heart. His eyes widened as he gasped.
My face morphed into my dark rage. Black spidery veins cascaded down my face with my fangs extended out and my eyes glowing bright. “Didn’t they ever tell you to never stab someone when they have their back to you? There’s no honor in that!” I growled.
I pulled out the blade for him to see that it was the same one he intended to use on me once. I

plunged it deep into his heart again. “I think you lost something and I’m returning it to its owner.” I

for Audrey!” Ripping open his chest as he screamed out in agony. He started chocking on his own

blood. “And this is for my mother!”

Who am I, you ask? I am a woman who wears many hats. A mother of 3 wonderful boys is my first and for most priority, and from there it trickles down. I’m a wife, a cook, a house cleaner and a mommy to two dogs and a lazy loveable cat. Then there’s my ulternate life.. The writer  she is the kid who refuses to grow up. Stuck in a mind state of a teenager, who still has imaginary friends. The two halfs of me get along great!! As long as I let the writer out and listen to my imaginary friends tell me their story, then there’s no conflict. If I keep her caged up too long… Well… You know what they say, when you keep the beast caged up to long, it gets angry.

The life of a writer is who your born to be, not a job you just take on. It’s who I am. 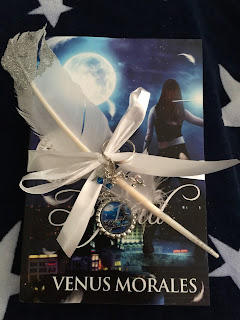