The Thinking by Dallas Sutherland with Giveaway 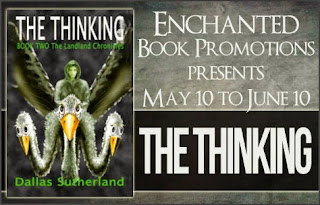 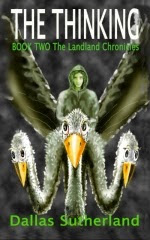 THE THINKING
(The Landland Chronicles #2)

LANDLAND BECOMES ITS OWN SAVIOUR …
The Greying snakes across Bigriver towards Landland … all the lands are in turmoil. Meah combines her power of thinking with the magical Book of Colours, and joins the Bigriverland army to fight the horrid Firbog. Faith, Hope, and Charity, the white many-headed-winged-thing, returns. Auntie Beryl has become the evil Queen Berilbog– she must be stopped. Many-headed-winged-things soar high over battle-fields, three-humped-beasts-of-war go on the rampage, and, from out of the mists of the greying, slithering Homunculi goad them on.
Meah's magical plans are not what Landland needs– Firbog hordes swarm across a dried up Bigriver into Landland, cutting their way through The Scented Forest, all the way up to the tip of Mount Beacon.


Chaos reigns supreme, Landland writes its own story … but the story is all wrong. Meah looks for a way to escape. Will she find her father, The Biggo, again? Can they win their way home– should they leave Landland and all their friends in the clutches of Auntie Beryl, the Grey Lady?

Nera tossed his bow and arrow to one side and wrenched the bag from Meah’s back. He undid the flap and pulled out the black portfolio containing the Book of Colours.

‘Come on – let’s get it open,’ Meah ordered. She snatched the portfolio from Nera, slid the book out and opened it, while Nera emptied the rest of the bag’s contents on the ground.

‘Are you going to use these?’ Nera asked, holding up a fistful of crayons.

‘No – not now, I’ve got to concentrate on painting. Just get them all out of the box, and lay out the paint boards, too. Then, you’d better keep a lookout, because I need to face this way,’ Meah said, pointing back towards the Northhaven archers at the end of the hedgerow. She began to arrange the paints and boards on the ground around her, and all the while leafing through the Book of Colours.

‘Yee-ess! I’ve got it!’ Meah shouted, stopping at a page midway through the book. ‘I knew it was in here somewhere.’

She ran her finger over a heading which read, Mist Experiment. No. 2. Beneath the heading was a series of colour experiments and written instructions of how to create the exact colours.

‘Yes, this is what I need to start with – at least,’ she said, looking back over her shoulder. ‘How we doin’ Nera?’

Meah spoke out loud as she went. ‘Right, cyanine blue and magenta, with a dash of white to start with. Now, what did old Amorgin give me that will do the job?’

Meah picked out the closest thing to cyanine blue – lapis lazuli. Next she chose a tin of scented-rose red for her magenta, and finally a sea-foam white. She used one of the paint boards as her palette onto which she poured a small pool of oil of paint pod. Behind her, the Firbog drums boomed in reply to the sound of a tap tap tapping. She dashed the three colours into the oil of paintpod. Next, she snatched a selection of brushes from the bottom of the paint box and began to mix, adding a little of one colour here, and a bit more of another there. When she thought the colour was about right she arranged several of the paintboards in a long line, end-to-end, in front of her. Then she began to paint.

A hail of arrows darkened the sky above as the Northhaven archers let loose their first volley. In a flash, Meah ran her brush over the paintboards. She left a broad sweep of colour in her wake, from left to right. 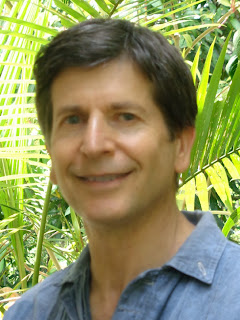 Over the last twenty-five years, the Author has exhibited a creative bent across a range of industries including graphic design, fine arts, and trompe l'oeil murals. He has lectured in fine arts and studied Art History, Literature, Adult Education, and Creative Writing. Works include play scripts and short stories. The Greying is his first published novella, with further books planned as part of the fantasy series. He draws inspiration from myth, legend, and fairy tales.


He lives on the Sunshine Coast in Queensland, Australia with his partner Kerri, and daughter Ruby.