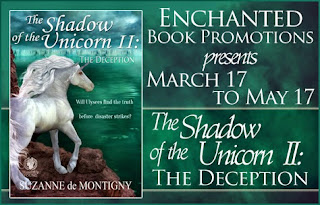 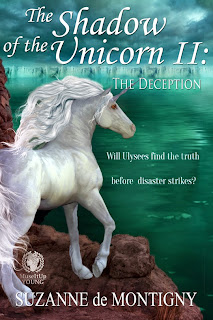 Ulysees’ breath was ragged, and his heart filled with terror when they galloped toward the herd pursued by an enraged Icarus.

How did the Legacy of Azaria transform into the world fear it has, the unicorns barely existing hidden in the depths of the forest? Why is Icharus, the Great Stallion, so cruel and ruthless? And who is Jaresh, the invisible being who takes away their powers? Angry, the young colt Ulysees and his friend Téo rebel, following an abandoned trail where they’re discovered by humans. Now the entire herd must make an exodus. But Ulysees discovers there’s more danger then just humans when he meets a giant creature who warns them of impending doom…


I'm not usually a big fan of books with 'animals' as the main characters, since it's often difficult for the authors to get these characters to come across right. The Shadow of the Unicorn II not only did a good job in bringing unicorns to life, but did it in a refreshing way.

I read this book, number two in the series, before the first one and had absolutely no problems diving into the story. The book starts with a young unicorn following his father, and as the first dialogue began, I was hooked. Although this is a story featuring unicorns, the thoughts and dialogue is very modern and reflects the attitude of every day kids. Middle graders will have no trouble falling into the scenes and sympathizing with the characters.

The story itself takes place in a pre-historic time, just then when dinosaurs are about to face the changing Earth and their nearing extinction. This intermixing of two very different creatures (unicorns and dinosaurs) was well done and had a nice, adventurous twist to the end of the dinosaur age story that one so often sees (meteors, changing climate and dawning of two legged creatures.)

The story is largely pushed along through dialogue. This keeps a quick pace with a fun dash of humor and lots of twists and turns. The scenes are still described well enough that the reader can picture the surroundings and understand what the unicorns are going through. The only thing which threw me for a bit was the amount of characters; there a quite a few to remember at first, and sometimes I felt that I would have liked to have gotten to know a couple of them better.

Summed up, this is an enjoyable read not only for horse and unicorn lovers, and the writing and dialogue will especially appeal to kids 8-12. The writing makes for an easy read while adding enough adventure, twists and turns to keep the story going until the very end.

They traveled on until the path narrowed, brambles and thorns scraping against their backs. Slowing, Ulysees scanned the woods around him. “I don’t think this trail’s been traveled on in years. I don’t see tracks anywhere, do you?”

Ulysees’ gaze met his friend’s, uncertain. “I wonder why. Perhaps we should turn around. Maybe Alannah was right.”

Téo’s eyes combed their surroundings. “No. We’ve come all this way. Let’s keep going. Besides, we’ll be in trouble no matter what we do.”

Deeper and deeper into the forest they traveled, reveling at the strange and new sights until a strong, musky odour filled the air. Ulysees pulled up, his nose wrinkling at the smell. A twig snapped—a really big twig. Startled, he jumped backward.

“Maybe we should turn around,” he said.

Téo’s eyes grew large for a moment until something in the distance caught his attention. He squinted. “No wait! I see light. I think we’re near some kind of meadow!” He broke into a trot. Ulysees followed close behind.

As they approached the bright spot at the end of the trail, they came to a wall of brush. Pushing with their hooves, they broke through the tangled web of branches until they made a hole large enough to pass through. When they reached the other side, they halted and stared in wonder at the beauty that lay before them.

“It’s like the meadow back home, only bigger and sunnier,” exclaimed
Ulysees.

“Yeah. Look at all that grass, and so long. But those trees,” said Téo, “they look dead, like after the wind blows too strong. Why are they arranged like that—like they’re laying one on top of another?”

Taking cautious steps, they moved until they reached the fallen trees.

“But where are the roots?” Téo sneezed at the moldy stench.

“Wait ‘til we tell the fillies about this. Can you imagine how mad Icarus would be?”

They let out a thoughtless laugh, throwing their heads back and shaking their manes. Ulysees snorted and stamped his hooves mimicking the stallion. Again, they brayed with laughter…until out of the corner of his eye, Ulysees saw something move… 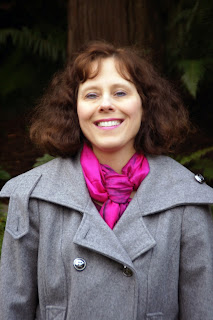 Award winning author, Suzanne de Montigny, wrote her first novella when she was twelve. Years later, she discovered it in an old box in the basement, thus reigniting her love affair with writing. A teacher for twenty years, she enjoys creating fantasy and paranormal for tweens and teens. She lives in Burnaby, B.C., Canada with the four loves of her life – her husband, two boys, and Buddy the dog.
Five Fun Facts About Suzanne de Montigny