The Soul Thief by Majanka Verstraete with Giveaway 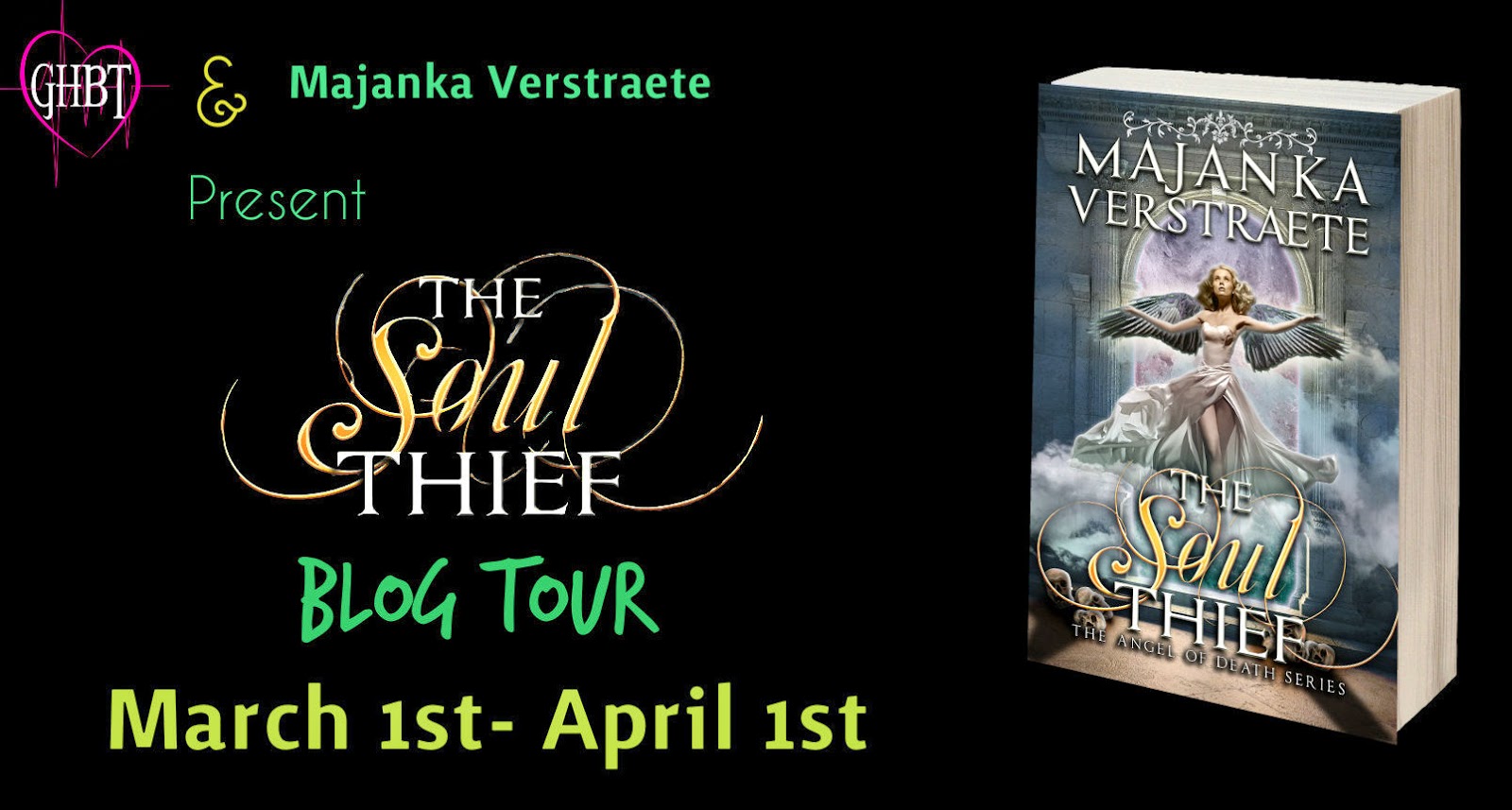 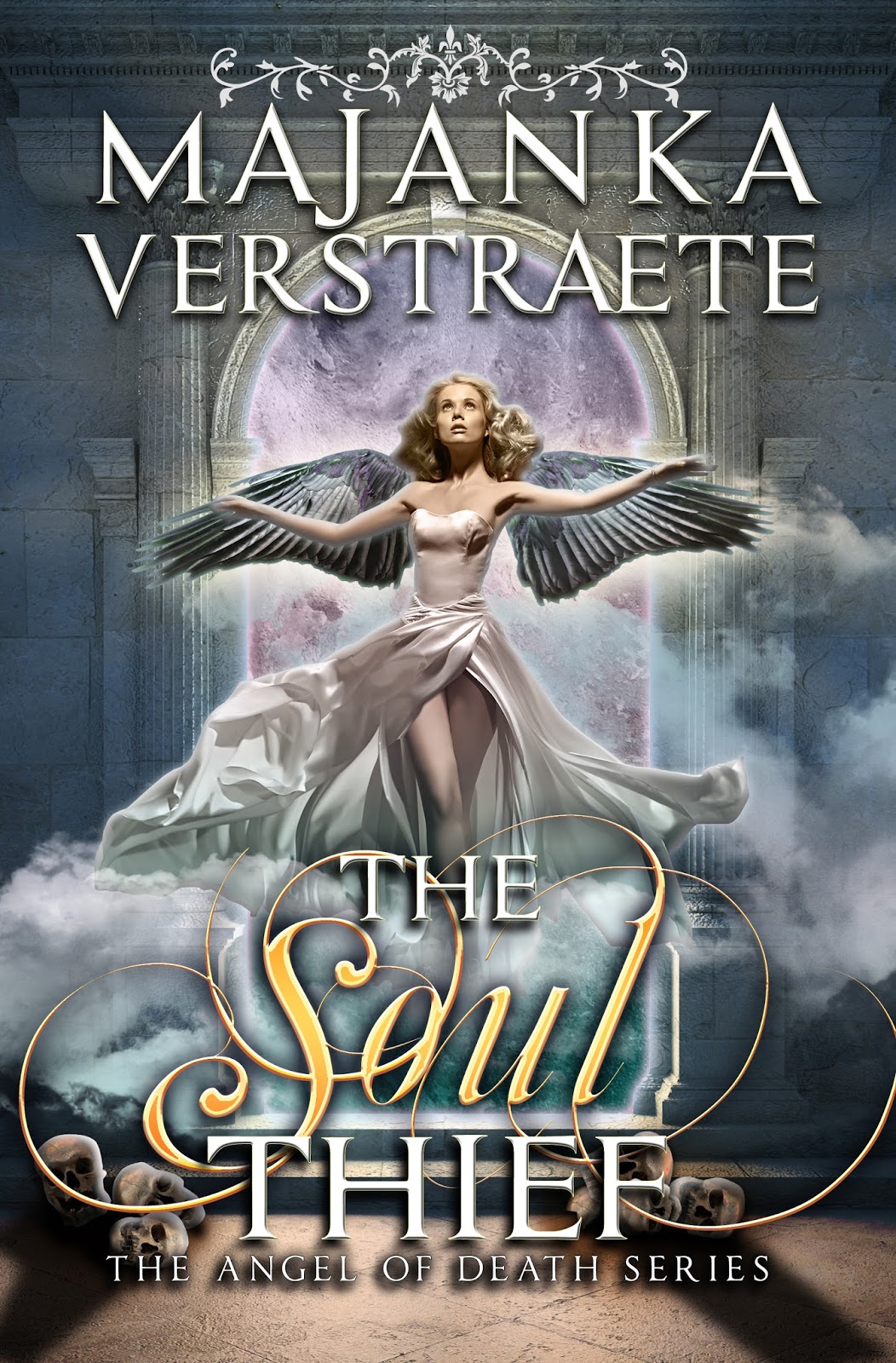 The Soul Thief
The Angel of Death Series # 1
By- Majanka Verstraete
Genre- YA Paranormal
Published By- Booktrope Publishing
Published On- November 11, 2014

When sixteen-year-old Riley is injured in a car crash and sees a girl stealing a boy’s soul, she’s convinced she’s hallucinating. But when she sees the same girl at the hospital later, she knows she wasn’t dreaming. That’s when Riley learns her secret heritage and who she really is: a halfling Angel of Death.

Riley must come to terms with her new reality and supernatural abilities, but before she can do this, girls her age start dying in mysterious circumstances. It’s up to Riley to figure out why, what the innocent victims have in common, and what she can do to stop them.

THE WORLD EXPLODED IN a chaos of fire, debris, and noise. Sirens screamed and low voices mumbled in the background. I lifted up my head and groaned. My head weighed about a thousand pounds and throbbed as if someone had hit me with a hammer. The interior of the car swayed from left to right.
A dark fog rose up in front of the car. Vague specters moved back and forth in the mist. I squinted and the specters turned into paramedics dressed in white clothes with stains all over them, who ran from one patient to another. Four or more cars had collided and mine was the last in line. Two cars burned with tall, flickering flames. A woman crawled out of one of the burning cars, half of her face blackened.
My stomach twisted and bile rose up in my throat. I searched for the door handle without turning away from the apocalypse happening in front of me.
The woman with the burnt face started screaming. The sound shattered my eardrums. A paramedic rushed toward her and pulled her away from the searing car wreck.
My fingers found the door handle and I pushed the car door open. A gush of fresh air entered the car and I took a deep breath. The air filled my lungs, and even though my surroundings still swirled around as if on a carousel, they started to slow down. I fiddled with the lock of my seatbelt, trembling like a leaf. Eventually the lock clicked and I tumbled out of the car. I gripped the door handle so hard my knuckles turned white while I pulled myself up, leaning on the car.
“Are you okay?” Someone grabbed my arm and helped me to stand up.
My savior was a forty-something woman with a round face, large eyes, and a red flush on her cheeks as if she’d just run a mile. She was tall and chubby, and while she appeared friendly enough, she stared at me wide-eyed, the chaos of burning car wrecks and wounded people reflected in her irises.
“I don’t know,” I said. “My head hurts and the world is spinning.” She nodded and helped me to the nearest ambulance. “Sit down.” She waited until I’d sat down and then looked at my injuries. She dabbed a wet cloth on my forehead and when she pulled it back the cloth was stained red.
My gaze fixed on the scene unfolding behind her. Two paramedics took turns performing heart massage on a young boy, whose broken body was spread out on the ground. His skin was the color of a bridal gown and his lips had turned a faint blue. He couldn’t be older than eight or nine. Broken glasses lay next to his body.
Right when the paramedics switched places, a girl appeared behind them. She popped up out of nowhere. One second there was no trace of her, the next she stood there, as if she’d been there all along.
My heart raced in my chest. I wanted to say something but the words got stuck in my throat.
The girl’s red hair with black extensions reached to her shoulders. She wore a short checkered skirt, black combat boots, a venom-green tank top, and black stockings. A chain dangled from her skirt. She chewed bubblegum with her mouth open. Everything about her screamed wrong; from the way she’d suddenly appeared to how she carried herself, as if she was strolling around in the park on a summer’s day, not standing at the scene of a gruesome accident in the middle of autumn. Even her clothes didn’t match the weather.
She knelt down and put her hand on the chest of the injured boy. For a while, nothing happened. But then a see-through, shiny form rose above the boy’s body. The specter looked exactly like the boy — same age, same height, same clothes, but it shone like a diamond.

About the Author-
Majanka Verstraete begged her Mom to teach her how to read while she was still in kindergarten. By the time she finished fifth grade, she had read through the entire children’s section of her hometown library.

She wrote her first story when she was seven years old, and hasn’t stopped writing since. With an imagination that never sleeps, and hundreds of possible book characters screaming for her attention, writing is more than a passion for her.

She writes about all things supernatural for children of all ages. She’s tried to write contemporary novels before, but something paranormal always manages to crawl in.

Majanka is currently studying for her Master of Laws degree, and hopes one day to be able to combine her passions for law and writing. When she’s not writing, reading or studying, she likes watching “The Vampire Diaries” and “Game of Thrones,” spending time with her friends, or playing “World of Warcraft.”

And Enter the Giveaway Here!

Email ThisBlogThis!Share to TwitterShare to FacebookShare to Pinterest
Labels: Giveaway, Majanka Verstraete, The Angel of Death Series, The Soul Thief, YA Paranormal