Bash and Lucy Fetch Jealousy by Lisa and Michael Cohn 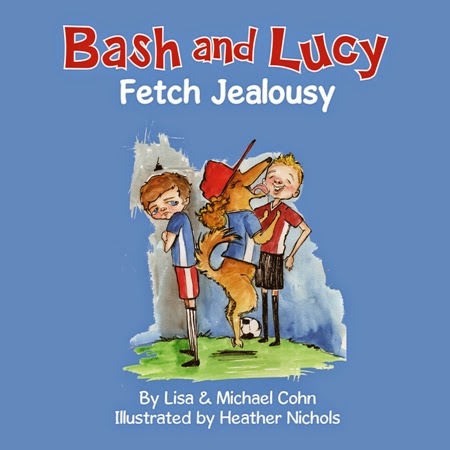 From an award-winning Mom-Son team featured on the Today Show, Bash and Lucy Fetch Jealousy is a contemporary boy-and-dog book. Bash’s dog, Lucy, helps coach his soccer team, and Lucy leads the team to the championships. But Bash is overcome with jealousy when Lucy enchants a team of Special Olympics kids who say they want her to coach their team. Can Bash overcome his jealousy and learn to share Lucy with kids who say they need her? This is Book Two in the Bash and Lucy series, following Bash and Lucy Fetch Confidence, a Mom’s Choice Silver Award winner and finalist, USA Best Book Awards. Co-Author Michael Cohn, age 6, has appeared on the Today Show, on SiriusXM Radio, in Disney’s Babble, in The Oregonian and other media.
MY TIDBITS


I opened the first page and simply had to smile. The joy that dog Lucy's presence induces on Bash and his soccer team was very tangible in those first words and illustrations. Lucy isn't only a pet, she's Bash's soccer team's trainer...of sorts. This idea alone will draw kids in.

Firstly, I enjoyed seeing a book with soccer and loved the way this sport theme was worked in without being the main theme. This is something not seen often enough. With Lucy, the playful dog, added in, this book is sure to be a winner among boys. However, this book isn't about the fun of soccer or dogs, but rather has some very important messages.

Bash not only shows tinges of jealousy when he has to constantly share Lucy with his soccer team, but when another team asks for her help, it's more then Bash can handle. His emotions are understandable, and the illustrations bring his and the team's disappointment/anger across very vividly. Here, the author lightly touches upon the theme of kids with special needs. The problematic these kids have is weaved in as an undertone without taking over the main story line--a bit like a slight reminder.

The illustrations are colorful and bring across the feelings and emotions of the characters very well. The plot itself is simple and fitting for the intended age group. The wording itself is very simple and would work great as a read-a-loud for younger kids as well as a read-alone for those beginning readers.


Writer Lisa Cohn and her 6-year-old son, Michael, have appeared on the Today Show, SiriusXM Radio, AM Northwest and Disney’s Babble, in addition to the Oregonian and other media. Their first book, “Bash and Lucy Fetch Confidence,” received a Mom’s Choice Silver Award and was a 2013 USA Best Book Award finalist. Book lover Michael reviews children’s books in taxis, gyms, lodges and parks and the Cohns post them on their YouTube channel!
Here’s his latest review: http://youtu.be/p6JjXtd5Xwg
Lisa and Michael’s aim is to share with children their love of dogs, books and writing! Learn about their school visits, dog blog and book reviews by Michael and friends by visiting www.BashAndLucy.com
on March 10, 2015