Zak and Zoe and the Ghost Leopard by Lars Guignard 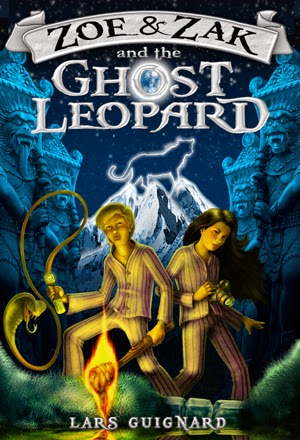 The Heroes of the Himalayas Book #1

Zoe doesn’t believe in ghosts. She doesn’t believe in mythical creatures. And she definitely doesn’t believe in magic. But it’s amazing how quickly everything you think you believe can change when you’re confronted by the impossible.
When Zoe finds herself lost, halfway around the world, her first thought is that she needs to get back to where she came from. Fast. But her friend Zak has other ideas, and when a peculiar snake charmer directs them deep into the Himalayan Mountains in search of a mythical leopard, what began as an accident soon takes on a life of its own.
Zoe isn’t worried. Not at first anyhow. Sure the talking elephant is strange, and the snake charming yogi is stranger, but she’s a big girl. She figures she can handle it. But then, somewhere between the living statues and the screeching monkeys, Zoe realizes that what is happening to her and Zak is no accident.
It’s the result of something Zoe has deep within her, an energy so powerful, yet so personal, that she alone can right a deadly wrong.
But nobody said confronting an ancient evil would be easy. And Zoe and Zak will have no chance at all unless they put aside their differences and believe.

This story starts with two kids put in a perfect situation for adventure - off in a foreign country and totally unhindered by their parents. Yep, Zak and Zoe can take off on their own--adults might wonder at this point, but kids could dream of nothing better. Of course, Zoe and Zak not only experience the unknown culture of India, but mystic and mysterious events, which are really beyond all logical explanation.Firstly, I enjoyed this splurge into another culture, especially one as exotic as India. The author does a great job bringing a few interesting tidbits of this country and it's people, while leading Zak and Zoe on their amazing trip. I enjoyed the descriptions and had no trouble picturing the scenes around me.The plot itself is fantastical, nothing for little logic-thinkers. Zak and Zoe encounter strange people and beings as they go from one sometimes dangerous situation into another. They're fun to follow, and their polar personalities add a nice touch of humor to the suspense.Zak and Zoe are enjoyable characters which readers of this age group will mostly relate to. I did find that Zoe sometimes over-stepped her age, giving an older impression. But I doubt younger readers will notice this.Summed up, this is a nice mystery/adventure set in a foreign world (in many respects). I think fantasy friends ages 9+ (especially boys) will enjoy this.