Children's auhor, Joan Holub, has added a super cute board book series for toddlers to her list! And I had to share these with you, since these are ones you won't want to miss. My own daughter toted these around with her for days. . .literally. 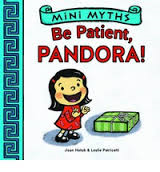 When Pandora is warned by her mother not to open a box, her spirited curiosity trumps her obedience. Pandora harmlessly touches the box, innocently leans on the box, and eventually, albeit accidentally, bursts the box open! The cupcakes that were hidden inside are ruined, except for one last vestige, which Pandora presents in the hope that her mother still loves her. Leslie Patricelli’s depictions of this physical comedy bring a lively narrative to Joan Holub’s carefully crafted text. Includes a summary of the original Pandora’s Box myth at the end.


My Daughter loved this book! She carried it and Play Nice, Hercules around with her for weeks.

I found this book simply wonderful. The illustrations are super cute, the wording just perfect and the idea behind it - amazing. As an ancient myth fan, I loved the way Joan was able to bring down the basic ideas surrounding these characters to a young level. Honestly, when I first saw the books, I was skeptical if it could be done. But Joan does a great job of taking the simple idea of Pandora's box and making it understandable for young kids.

As an extra bonus, she's added a short description of the original myth on the last page. My 9 year old son found this part interesting.

In other words, I give this a huge recommendation!

You can find this on Amazon! 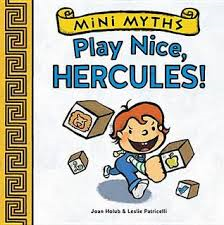 
Hercules is not as interested in “playing nice” as he is in playing strong! But when one feat of strength destroys his little sister’s 12-piece tower, he must use his powers for good to restore the tower and seek her forgiveness. She forgives him indeed, and then shows her own strength by gleefully knocking down the stacked blocks herself! Joan Holub’s expertly focused text pairs perfectly with Leslie Patricelli’s famously humorous illustrations. Includes a summary of the original Hercules’s Twelve Labors myth at the end.


Along with Play Nice, Pandora!, my daughter toted this book around for weeks. And although she didn't read it quite as much, she refused to set it down.

When I first saw this mini-myth series, I was a bit skeptical as to whether these myths (or the ideas behind them) could really be brought down to such a young age level. But yes, they can, and Joan does a terrific job doing it! I'll admit, I preferred the Pandora book over this one, but this is still, one worth reading. The illustrations are well done and colorful. The wording perfect for the intended age group. There's a nice message in this story little kids ill understand and enjoy.

On the last page, the author adds a short summary of Hercules. My son enjoyed these.