Review: The Other Half of Happy by Rebecca Balcarcel 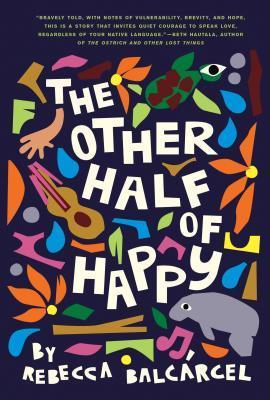 Twelve-year-old, bi-cultural Quijana likes her Anglo life just fine. Nevermind that her Spanish is shaky and she can’t talk with her abuela. When her Latino relatives show up and prompt her parents to plan a trip to Guatemala, Quijana plans an escape. She’s sure that being half makes her happy.Chronicle brings us poet Rebecca Balcárcel's middle grade novel about a biracial girl who's navigating between the Anglo and Guatemalan sides of her family, a burgeoning crush and a cool new friend, and trying to figure out what's going on with her little brother, who is becoming remote and hard to reach, all while trying to determine just who she is. Publication is scheduled for August 2019.

This book takes a look at the difficulties being bi-cultural can bring along with the problems of middle grade and family ups and downs.

Quijana is twelve years old and comes from a bi-cultural family, which isn't a problem until she changes schools and hits seventh grade. Not only is she treated as different in school, thanks to the group who speaks their mother language, Spanish, but the side of her family from Guatemala is suddenly wishing for closer contact. Speaking only English, she's beginning to feel left out...and the school issues aren't helping matters. Add a sudden health problem from her favorite grandmother, and Quijana's happy life takes a slide over onto the unhappy side.

Being a bi-cultural family with a twelve year old daughter in an extremely situation, this book hit a very familiar chord. While I was a little surprised that Quijana is fine until switching schools (kids do start that sort of teasing and border-building way before this age for even less obvious differences), her disappointment was completely understandable and came across pretty true. Quijana's own insecurities and self-expectations were understandable and believable. Mix that with the very realistic expectations of the 'foreign' half of the family, and this book does portray the issue nicely. It's easy to feel for Quijana as she's forced on a tough path of learning about friendship, self-worth and family connections.

The characters fit the age group and come across naturally. They add the right depth to the plot, one which isn't as simple as just being bi-cultural. The author also hits upon normal family problems and dealing with every day life, throws in the glimpses of  first crushes, and adds a big helping of the issues when a loved one faces major health issues. The author also adds a nice slide into symbolism with Quijana's name. Coming from Don Quixote, Quijana's name isn't something she's proud of as she only sees the crazy old man on horseback attacking windmills. But the true strength behind Don Quixote fits Quijana's own story arc.  It's a nice touch and adds to the already lovely read.

Rebecca Balcarcel received the Jane Kenyon Poetry Prize, and her work has appeared in journals such as the North American Review. She is an associate professor of English at Tarrant County College. She lives in Bedford, Texas.
on October 11, 2019

Email ThisBlogThis!Share to TwitterShare to FacebookShare to Pinterest
Labels: Revecca Balcarcel, The Other Half of Happy